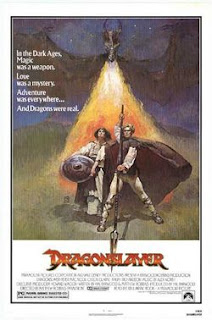 To appease Vermithrax Pejorative, an old dragon prone to rampages, Casiodorus Rex (Peter Eyre), the ruler of a small kingdom, sacrifices virgins twice a year during the solstice (winter and fall, I think) to the dragon. A young woman masquerading as a man leads a contingent to visit the sorcerer, Urlich (Ralph Richardson), and ask him to slay the dragon, but Urlich is killed during a test of courage. Urlich’s apprentice, Galen (Peter MacNicol), boldly decides to take his master’s place and slay Vermithrax. The dragon, however, is known to wreaked havoc and much destruction on the human settlements immediately after the numerous unsuccessful attempts to slay him. The film begs three questions: does Galen have what it takes to be a dragon slayer? Can the novice be a wizard and unleash the magic necessary to kill a monster? And did he truly understand his master’s final instructions to him?

Dragonslayer remains an exceptional fantasy film over two decades after its release. The Paramount Pictures/Walt Disney co-production obviously lacks the computer effects that make the monsters and supernatural creatures of today’s films so convincingly real. However, some of the best creature builders and special effects minds of the time worked on the film, and the result is a mechanical dragon that is as scary today as it was in 1981. This is truly a monster and a monster movie that stands out from the pack.

While the acting is wobbly, everything else about Dragonslayer is great. From the locations in Scotland and Wales to the natural lighting used to photograph this film, the technical aspects give a ring of truth to this fantastic film. Co-writer/director Matthew Robbins directs the film at a nice pace that overcomes the shortcomings in the actors’ performance and a script that seems to wander and lacks real dramatic conflict between the characters. There is a lot of potential in this story for conflict that is underplayed or underdeveloped. One thing that the script does do well is emphasize how Christianity slowly encroached on the old pagan ways and belief in magic. There is a strong feeling of authenticity in this film’s depiction of the old ways giving in to the new, and that the light of Christianity has come to dispel the darkness of evil and the black arts. Dragonslayer isn’t high fantasy like The Lord of the Rings, but this is high quality “reality-based” fantasy that hits the spot.