God I Still Hate this Movie: The Hours 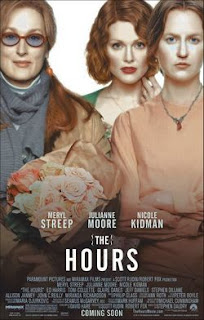 Director Stephen Daldry’s The Hours is one of those prestige, award season movies. It’s no secret that Hollywood, or the film industry, if you will, reserves films of a serious, meaningful, thoughtful, artistic nature for release during the last quarter of the year, especially late November and December. That is a late enough release so that the films will, hopefully, still be fresh in the minds of Oscar voters come January or February, whenever ballots are mailed to members of the Academy of Motion Picture Arts and Sciences.

This is like a big bake off to impress Oscar voters. Studios trot out their best baked goods to tempt the appetites of those who might award them one faux gold statue called “Oscar,” or maybe two, or three or so on. In a way, these films are often as formulaic as the trash the studios trot out during the summer and winter vacation seasons. Oscar contenders are made of varying measuring spoons and cups of serious acting by acclaimed thespians, scripts from the best scribes adapting the most recent literary sensations, veteran directors pining after that Oscar that would define their careers, and, of course drama. Oh the drama, be it initiated by disease, murder, family conflict, or international strife, the drama is so important. Comedies hardly ever win Oscars, and Oscar treats science fiction, fantasy, horror, and mystery like bastard children.

What does that have to do with The Hours? The Hours

is so painfully and obviously aimed at earning awards for its cast and crew that it can’t help but show all its tricks. Like a clueless magician, The Hours spoils the show by showing its hand too early.

The story revolves around three women of different eras, two of them affected by the works of the third woman, Virginia Woolf (Nicole Kidman). From 1923 to 1941, Ms. Woolf lives in a small English country town at the behest of her doctor and her husband Leonard (Stephen Dillane) who feel London is bad for her unstable mental health. Ms. Woolf is working on her novel Mrs. Dalloway, a novel in which the story takes place over an entire day, but she’d really like to return to London social circles despite the fact that London eventually drives her wacky and makes her want to kill herself. In 1951, Laura Brown (Julianne Moore), a pregnant housewife, is preoccupied with the novel Mrs. Dalloway

and is contemplating suicide on her husband’s (John C. Reilly) birthday. In 2001, Clarissa Vaughan (Meryl Streep) is living the novel the day she is planning a party for her long time friend, Richard Brown (Ed Harris), a poet who is dying of AIDS. As the story unfolds, we see how the women and the events of three eras are inextricably linked.

First, there is a better Stephen Daldry film, the wonderful Billy Elliot

. However, the acting is good. How can it not be, considering the film’s stellar cast? The problem is the material. It’s so morbid and moribund, so depressed and stilted. Yes, Ms. Streep can emote. Ms. Kidman is simply mesmerizing as Ms. Woolf. The material just didn’t hold my interest. Sometimes, I couldn’t wait to see what Virginia would do next, so good was Ms. Kidman in creating this fascinating creature; other times, I couldn’t wait for her tired ass to just disappear. To be honest, if Meryl Streep wasn’t so good at emoting, her character would have been an empty shell, merely a melancholy mannequin. It seemed as if she were just there only to look earnest and sad.

And, in the end, that’s the best way to describe this film – earnest, yet sad. Nothing happens beyond people being anxious and depressed. The grimaces, the smiles to hide the emotional exhaustion, the pangs of emptiness, the feelings of regret, the etc., there was good material; it’s just that what made it onto the screen could leaving you asking, “if you’re so sad, what’re you going to do about it?” The Hours is oh-so serious with an oh-so talented cast and oh-so serious artistic intentions. In those moments between the interesting moments and dreary tedium, I could only ask, “Oh, so what?” This movie does have many good moments, and if you’re a fan of the three leads, it’s certainly worth seeing just to watch the stars.

Maybe, someone needs to have lived a long life filled with the bitter and the sweet, with lots of regret, and with lots of life experience to appreciate this film. Maybe, The Hours is geared towards an older audience, an older female audience of a particular intellectual persuasion. I think the occasionally witty Virginia Woolf character would have made for a good film had the character not been relegated to a winsome creature mindlessly chasing self-destruction. Of course, death is part of life, but the life/death struggle doesn’t always make for a good movie.