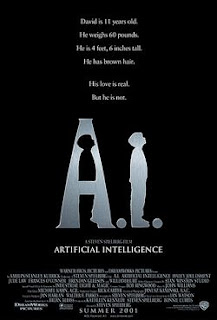 SCI-FI with elements of adventure and drama

In the future, humans have become technologically (if not morally) advanced enough to build humanly realistic robots called mechas to serve humanity. The most advanced is a robot called David (Haley Joel Osment, The Sixth Sense), who can be programmed to have feelings of love for a human, a gift (or curse) no other robot has; he is, in a sense, an artificial kid. David moves in with Monica (Frances O’Connor) and Henry Swinton (Sam Robards), a couple whose own child, Martin (Jake Thomas) is in cryo-stasis, stricken with an incurable disease. After Martin is cured and comes home, Henry becomes angry that Monica still has strong feelings for David and wants David returned to his creators. Monica abandons David in the forest rather than return him to his creators for fear that they will destroy him.

Directed by Steven Spielberg, A. I. Artificial Intelligence was a project that director Stanley Kubrick had planned helm, but turned to Spielberg feeling that he could better served the potentially effects laden film. Some film aficionados still consider Jaws, Close Encounters of the Third Kind, Raiders of the Lost Ark, and E. T. the Extra-Terrestrial, Spielberg’s early works to be his best films. Those movies were filled with a sense of wonder, awe, magic, terror, curiosity – basic emotions and feelings. Other people considered these films too manipulative and too sentimental. What the latter misunderstood was those films’ powerful visual storytelling; here, films worked the way they should. What we saw on the screen was supposed to move us, and the films certainly did. Alas, Spielberg grew up and started making serious grown up, big boy films that would be worthy of Oscar’s attention.

A. I. is a return of Spielberg the magician/storyteller, and the film’s screenplay is the first one written Spielberg has written without a collaborator since Close Encounters. He infuses A. I. with a sense of magic and wonder, but the film is about David’s determination to be a real boy. To that end, however, the film becomes a bit muddled as it nears the conclusion of that quest. At one point, David’s journey comes to an abrupt halt, and, in light of this, his determination seems pathetic, pitiable, and futile. On one hand, David obviously cannot be a “real boy,” in the sense of being an organic being. On the other hand, the issue is not the artificiality, but is whether are not his feelings for Monica are genuine. Upon that question does the movie hinge.

The performances are excellent. Osment has a natural gift to bring a character to life that is as rich and as uncanny as, say, that of Emily Watson. His hugely expressive eyes are, indeed, the windows to his soul. Unlike so many child actors, Osment can act rather than pretend; he literally takes on the identity of a fictional character. One has to see his work to truly believe how good he is. Jude Law is wonderful, charming, and has an air of danger about him as the confident mecha/dildo Gigolo Joe. Law transforms Joe into the perfect companion and very wise guide for David (although Teddy does his thing also), and Law seems perfectly at ease in his role next to Osment. Ms. O’Connor is the other gem in this film; she makes the evolution of Monica’s feelings for David natural and convincing, and she turns up the heat to make the scene of their parting quite tragic indeed.

The effects in A. I. are so prevalent, but like those in Spielberg’s Jurassic Park, they are natural and unobtrusive, integral to the feel of the film and it’s story. The playful colorful lights that fill the forest and the night sky reminds one of scenes from E.T. Frankly, the visual effects are beautiful; it’s just fun to see them.

Artificial Intelligence seems to reach a near perfect state, but then the film is marred by moments of forced sentiment. Some of the story in the film’s last half hour is cold and dry. Actually, the film is nearly ruined until its closing images sweetly dissolve. Don’t let that deter; it is still a special film. You can ignore most of the end. What you take from A. I.’s extraordinary first three quarters is magical: fine acting, engaging story, and a director who is still an accomplished magician who sometimes messes up when he lets his show linger on too long.