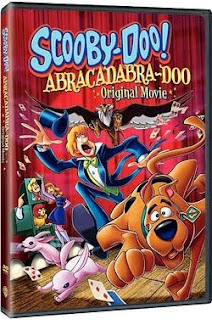 Beginning in 1998 with Scooby-Doo on Zombie Island, Warner Bros. started releasing direct-to-video animated movies based on the Scooby-Doo Saturday morning cartoon series. There has been at least one per year (except for 2005, when there were two). The latest film, Scooby-Doo! Abracadabra-Doo, is the 14th in the series.

Fred Jones (Frank Welker), Daphne Blake (Grey DeLisle), Velma Dinkley (Mindy Cohn), Shaggy Rogers (Matthew Lillard) and, of course, Scooby-Doo (Frank Welker) are the Mystery Inc. gang. After wrapping up their latest mystery, Velma gets a call from her mother asking her to check on her younger sister Madelyn (Danica McKellar). The gang heads Whirlen Merlin Magic Academy, where Madelyn has been studying stage magic. The school is run by acclaimed magician, Whirlen Merlin (James Patrick Stewart), who was a child prodigy at magic, with the help of his older brother, Marlon Merlin (Brian Posehn), a special effects whiz.

Whirlen Merlin Magic Academy is being terrorized by a giant griffin, which has been scaring all the students away. Smelling trouble and suspecting a conspiracy, the gang decides to investigate. Is the griffin the ghostly servant of the man who built the castle that now houses the academy? Or is the entire situation a plot to force Whirlen Merlin to sell the school? Suspects include Whirlen’s assistant, Crystal (Crystal Scales), housekeeper Alma Rumblebums (Diane Delano), Amos the Groundskeeper (John Di Maggio), and ice cream mogul, Calvin Curdles (Jeffrey Tambor), who wants to turn the castle into an ice cream parlor. The gang must deal with a banshee, a lion, and a spooky castle, but Shaggy has to deal with Madelyn, who has fallen in love with him.

Scooby-Doo! Abracadabra-Doo has a back-to-the-basics approach and theme that will endear it to longtime Scooby-Doo fans. The main characters are back to wearing their original 1969 outfits. The animation here is quite good, featuring excellent character movement and action; it is almost as good as what viewers will find in direct-to-DVD Disney animated features. The art direction is superb and the backgrounds are rich in detail and decoration, creating the perfect sets, environment, and atmosphere for this movie.

The storytelling is equally good. Scooby-Doo! Abracadabra-Doo offers an engaging, fun mystery that also harks back to the early years of the series. Scooby and company are back in form, and the supporting/guest characters are just about as good as the main players. The voice acting is good, but not great. Right now, I’m not quite buying Matthew Lillard as the voice of the animated Shaggy Rogers, although Lillard played Shaggy (well) in both live-action Scooby-Doo movies.

One of best things about this new movie is the giant griffin, a killer villain, the kind of cartoon monster that has traditionally made Scooby-Doo cartoons memorable. No Scooby-Doo fan, young or old, should miss Scooby-Doo! Abracadabra-Doo, and it is an excellent choice for introducing people to the world of Mystery Inc.

The Scooby-Doo! Abracadabra-Doo has three extras. Two are just commercials for other Scooby-Doo DVDs. One is a short feature about creating homemade puppets.