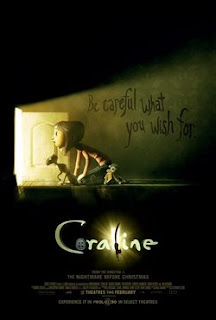 I am a fan of stop-motion animation films, so I was excited to hear that Henry Selick, the director of Tim Burton’s The Nightmare before Christmas, was making a stop-motion version of Neil Gaiman’s award-winning novel, Coraline

. At one 1 hour and 40 minutes, director Henry Selick’s Coraline is the longest stop-motion animated feature in movie history, and it certainly seems even longer. More often than not, watching Coraline

feels like a dreary chore instead of an eerie delight.

Coraline Jones (voice of Dakota Fanning) is a curious and adventurous 11-year-old girl who is also feisty beyond her years. Coraline and her parents, Mel and Charles Jones (Teri Hatcher and John Hodgman) have just relocated from Michigan to Oregon. Coraline misses her friends, and her parents are too distracted by their work as writers to entertain her. Coraline tries to find some excitement in her new environment, the Pink Palace, a boarding house on top of a hill. Her neighbors include the eccentric British actresses, Miss April Spink (Jennifer Saunders) and Miss Miriam Forcible (Dawn French), and an even more eccentric Russian acrobat, Mr. Sergie Alexander Bobinsky (Ian McShane). The only local close to her age is an annoying boy named Wyborne “Wybie” Lovat (Robert Bailey, Jr.) and his equally annoying semi-pet, The Cat (Keith David).

Coraline seriously doubts that her new home can provide anything to interest her – that is until she uncovers a small, secret door in the house. She crawls through the door and into an eerie passageway, which takes her to an alternate version of her life and existence. On the surface, this parallel reality, called Other World, is similar to her real life, but it is much better. The adults are cool, especially Other Mother (Teri Hatcher), a version of Coraline’s mother who pays more attention to Coraline and actually cooks delicious meals and tasty sweets. Coraline thinks that she could stay there forever, but when Other Mother starts to make shocking demands, Coraline wants no part of this off-kilter world. With the help of the mysterious Cat, Coraline makes a bid for freedom, but it will take all her bravery, grit, and ingenuity to save her real family and get back home.

is the first 3D stop-motion animated film, and for the most part, its ideal audience would be people who admire the art of stop-motion animation. Like Selick’s collaboration with Tim Burton (The Nightmare before Christmas

), Coraline is darkly inventive, but not as snappy and clever. In fact, the first half of this film is practically a disaster. The plodding narrative and flat voice performances suggest that Coraline was a short film disastrously stretched to a feature-length film. Even the animation is listless. It is more jerky-motion than stop-motion animation.

It is not until the Other Mother (also known as Beldam) shows her true nature that Coraline’s eerie nature really comes to life. This film has a creepiness that is so unsettling (perhaps because it deals with child abduction), but even then, this story, with its Venus flytrap and spider web allusions, can only limp through a somewhat exciting resolution and last act.

Coraline has the makings of being an exciting cross between the classic fairy tale and a spooky horror story with a contemporary sensibility, but it mostly fails to reach its potential. The only really good characters are Coraline, Other Mother, and the Cat, and the others are feeble, which could be a result of Selick’s surprisingly anemic screenplay. This movie even manages to waste Keith David’s exceptional talents as a voice actor. I admire what the filmmakers tried to do more than I actually like this film. I cannot quite embrace this clunky, clumsy riff on Alice in Wonderland. Still, I can’t dismiss Coraline, because I am one of those people smitten with the art of stop-motion animation.

Posted by Leroy Douresseaux at 8:18 PM