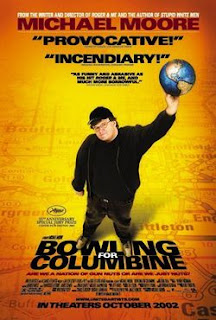 After passing over his Roger and Me

in 1989, the Academy of Motion Picture Arts and Sciences (AMPAS) handed out its Oscar for “Best Documentary, Features” to filmmaker Michael Moore for his 2002 feature Bowling for Columbine. The Writers Guild of America also awarded Moore “Best Screenplay Written Directly for the Screen,” one of many American and international awards the film won.

In the film, Moore explores the roots of American’s predilection for gun violence. He also takes a look at the massacre at Columbine High School in Littleton, Colorado where two students killed 13 people with guns and an incident in his hometown where a six year-old boy killed a six year-old girl with a handgun he found at his uncle’s home. Moore also examines American’s culture of fear and bigotry; he especially focuses on the bigotry against young, black men that marks them as violent predators. Moore also goes after powerful, elite political and corporate interests that directly make money by fanning a culture of bigotry, fear, and violence.

is exacting in the detail to which it pursues its topics, although Moore seems as stumped as anyone to provide answers. It is as if he’s pointing at the symptoms or results of our culture, but can’t find out why things are as they are. It’s a fair and mostly balanced look because Moore gives people a chance to speak. Some, in particular, Charlton Heston (then president of the National Rifle Association or N.R.A.) seem simultaneously proud and embarrassed of their very vocal support of guns and tacit support of gun violence.

The film is often very funny. Its issues are perplexing – especially the examination of Canada, a country with a lot of guns, but very few gun deaths. BFC is also quite heartbreaking and dramatic; the segments on Columbine and the murder of the schoolgirl in Michigan are heartbreaking. Moore knows just how to push buttons when he reveals that the mother of the small boy who shot the girl works two very low paying jobs because of Michigan’s “welfare for work program.” Even with the two jobs, she couldn’t pay her rent and was evicted from her home. She moved in with her brother, and that’s where the child found the weapon.

The film is a little over the top at times. The Heston interview doesn’t go well, and in the segment, Moore seems to be picking on this elder statesman of acting, who was later revealed to be in the early stages of Alzheimer’s disease. Oh, God must not like ugly.

Some may find BRC unbalanced, and though that makes it almost as much commentary as documentary, the film is important. Someone had to document the horrors of this violent, bigoted, and greedy leader of the free world in a form that would force its way into pop culture and into the popular conscience. This excellent film only makes people mad because it is both real and truth revealing.