Charlie and the Chocolate Factory Has Big Wow Factor 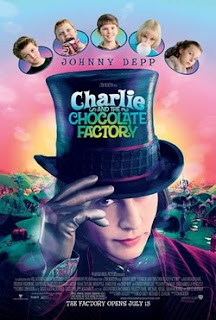 FANTASY/ADVENTURE/COMEDY/FAMILY with elements of drama

Charlie and the Chocolate Factory

, was first translated to the screen in 1971 and entitled, Willy Wonka and the Chocolate Factory

. Now, Tim Burton, one of the most vividly imaginative directors of the last two decades, brings the book to the screen again in Charlie and the Chocolate Factory, and Charlie is the most vividly imaginative movie since the Japanese animated film, Spirited Away. If not for a clunky ending, this would be the best film of this calendar year, but as it stands it still is the most beautiful and inventive film of the year to date. Be warned though, this is tasty, but dark, bitter chocolate and might offend lovers of the sweetly, sentimental chocolate of Willy Wonka and the Chocolate Factory.

Charlie Bucket is a poor boy who lives in a rickety, ultra-rundown home with his mother (Helena Bonham Carter) and father (Noah Taylor) and both pairs of grandparents. Charlie is a good-hearted boy, and every night he goes to bed dreaming about what might be inside the great factory he can see outside his window. The factory belongs to the legendary candy maker and chocolatier, Willy Wonka (Johnny Depp). Once upon a time, Charlie’s Grandpa Joe (David Kelly) worked at the Wonka factory; that was before Wonka closed the factory after his employees started selling his candy making secrets to his dastardly rivals. Now, the factory is running again, and Wonka makes a fabulous announcement one day. He will open his factory and reveal all its secrets and magic to five lucky children who find golden tickets hidden inside five randomly selected Wonka Whipple-Scrumptious Fudgemallow Delight bars. Charlie finds the final golden ticket and takes Grandpa Joe with him. They meet the highly unconventional Wonka and discover untold wonder inside the bowels of the factory building. Charlie’s generosity, however, will take him a long way with the irregular and quirky Wonka, and he may be the child who wins the biggest prize of all.

To see Charlie and the Chocolate Factory

on the big screen makes one realize the incredible amount of work these filmmakers put into getting this film right. I can’t help but appreciate the effort they went through to make a great fantasy film that would appeal to children as well as adults. Forty live squirrels were trained to create an intricate scene. One man played the Oompa Loompas, the workers who run Wonka’s factory – Deep Roy. He did countless retakes to create the separate routines of the individual Oompas with “motion capture animation” doing the rest of the work in bring the diminutive humans to life. Just those two instances alone make me thankful for what I got in this film.

and Minority Report) combined digital technologies with traditional design and created a magical world that previously could only come alive in the mind of a children’s book illustrator. Simultaneously futuristic and classic fantasy, recalling films as diverse as The Matrix

and The Wizard of Oz

, McDowell creates an interior world for Wonka’s factory that is as mind-bending as The Matrix and is as dreamlike as The Wizard of Oz. Director of Photography and Oscar winner, Philippe Rousselot (A River Runs Through It

), continually captures incredible flights of the imagination in cinema. Incredibly, he tops his work from earlier this year, Constantine

, with Charlie by making the real, the unreal, and the hyper-real seem so tangible and true.

Johnny Depp gives a daring performance that is so weird it could have been a disaster; in fact, the first time he fully appears on screen, his powdery pallor makes him look like Michael Jackson. Dressed in the costumes of Academy Award winner Gabriella Pescucci (The Age of Innocence

), Depp is the most dashing weirdo and creep, and he leads both the children in the film and the ones in the audience through a world that is as outlandish and bizarre as he. Depp, however, is the master of creating quirky leading men among the actors of his generation, and he creates another character that begs to be seen.

The rest of the cast is also good, but Freddie Highmore, who co-starred alongside Depp in Finding Neverland

, is a born child movie star. When this flick’s other juvenile stars are onscreen, it’s obvious they are stealing time from Freddie’s Charlie. That is one of the few mistakes that screenwriter John August and Burton make. Charlie seems to have to wait too far in the background for too long while the rest of the children are happily dispatched from the tale. Sometimes it seems as if this film is more Willy Wonka and the Chocolate Factory and less Charlie.

, and this phantasmagorical movie reaffirms our faith his ability to create visionaries fables set in storybook worlds. However, Burton’s worlds are darkly mysterious fantasies instead of the brightly, sunny, commercial pap that passes for much of children’s entertainment now. While Charlie and the Chocolate Factory may go way over children’s heads, Tim Burton’s dazzling visions are truly meant for film lovers, and Charlie is a treat for the family audience and a gift for the rest of us who appreciate this god among directors.


2006 Golden Globes: “Best Performance by an Actor in a Motion Picture - Musical or Comedy” (Johnny Depp)
Posted by Leroy Douresseaux at 9:08 PM