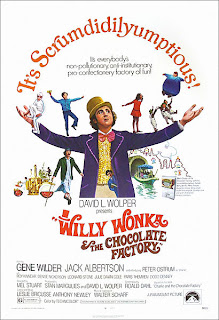 FANTASY/MUSICAL/FAMILY with elements of comedy

Some of the late-author Roald Dahl’s works have been adapted to screen. Perhaps, the best known of these films is Willy Wonka & the Chocolate Factory, taken from Dahl’s book, Charlie and the Chocolate Factory. It’s a nice movie for children, and two things that certainly make the film worth watching are Gene Wilder (who received a “Best Motion Picture Actor – Musical/Comedy Golden Globe nomination for his performance) and the songs, which received an Oscar nomination for “Best Music, Scoring Adaptation and Original Song Score.”

In the film, the best candies in the world are the chocolate confections of the Wonka Chocolate Factory, owned by the mysterious and reclusive Willy Wonka (Gene Wilder). One day Wonka announces that five lucky candy buyers who find a golden ticket in their Willy Wonka candy bars will be able, with one guest each, to tour his factory. One of the hopefuls is Charlie Bucket (Peter Ostrum, in his only film role), a boy from an impoverished family. When he finds the last golden ticket, he takes his Grandpa Joe (Jack Albertson) as his guest on the factory tour. Of the five children who find the golden tickets, Willy Wonka has his eyes on Charlie, most of all.

The songs in Willy Wonka & the Chocolate Factory are great, especially “The Candyman” (which became of a staple of Sammy Davis, Jr.’s stage show, although the filmmakers declined to allow Davis to play Bill, the candy store owner who first sings the song in the film) and also the Oompa Loompas theme. The sets look cheap (even for the early 70’s) and are only mildly imaginative in their design. Ultimately, this is a curiosity piece for adults, but a fun and fanciful flick for pre-teen children.