Review: "Over the Hedge" is a Surprising Delight 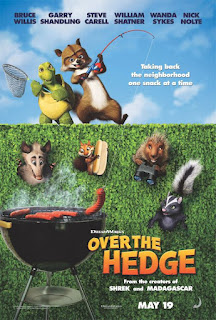 The subject of this movie review is Over the Hedge, a 2006 computer-animated film from DreamWorks Animation. This action comedy is based upon the syndicated newspaper comic strip, Over the Hedge, created by Michael Fry and T. Lewis. The film focuses on a raccoon who uses his friends to help him repay a debt.

RJ (Bruce Willis) is an opportunistic raccoon, and his greed causes him to destroy the treasure trove of a dangerous bear named Vincent (Nick Nolte). Vincent gives RJ less than a week to replace his loot. Fortune leads RJ to a sprawling new suburban neighborhood, where he figures he can replace all of Vincent’s things (such as potato chips, a red wagon, a blue ice cooler, etc.).

Meanwhile, Verne (Gary Shandling), a turtle, and the woodland friends that make up his family: a hyperactive squirrel named Hammy (Steve Carell); a sassy, but low on self esteem skunk named Stella (Wanda Sykes); a melodramatic possum named Ozzie (William Shatner) and his daughter, Heather (Avril Lavigne); Lou & Penny (Eugene Levy and Catherine O’Hara), a porcupine couple with three little ones, wake up from their long winter’s nap only to discover that a tall green thing has cropped up in the middle of their forest home. RJ arrives just in time to inform Verne and his group that the “thing” is actually a hedge, and over the hedge is the “gateway to the good life” – a neighborhood full of humans. Humans live to eat (where as the animals eat to live), and they have lots of food and lots of stuff, he tells them – stuff they can take for themselves.

Verne is suspicious and a little jealous of RJ’s assertive nature, but Verne’s woodland band is ready to follow the manipulative raccoon into the domain of their over-indulgent human neighbors. Verne believes that they have more to fear than to gain from humans, and he is right. Gladys (Allison Janney), the president of the neighborhood association, hires a murderous pest exterminator, Dwayne (Thomas Haden Church), to get rid or RJ, Verne, and the rest of the animals. Can RJ and Verne put aside their differences in time to save the group? Will RJ be able to replace Vincent’s things before he shows up to kill the poor raccoon?

Although there were times in DreamWorks Animation’s latest computer animated film, Over the Hedge, when I was sure the filmmakers were simply trying to make another middle of the road, easily digestible family film, there were many more times when I was shocked at how genuinely sly, witty, smart, and lightly subversive this cartoon movie is. The narrative takes the side of the group over the individual, in this case because the group survives best as a unit and not on the whims of an individual prone to always look out for number one. There’s lots of clever commentary on American consumerism and also on how much people waste, and class division comes up in the form of the woodland animals being poor people who are conservative and gather to live, while the humans over the hedge in suburbia are more about gathering things for status. The movie also takes several digs at junk food.

The quality of the computer animation in DreamWorks Animation’s films (produced by PDI) continues to improve with each film, and that’s evident in Over the Hedge. The texture of the animals’ fur, the reflective surfaces, and the sets (the neighborhood lawn grass is good enough to call attention to itself) are all quite impressive. The surface consistency looks more real; it’s as if the animals’ skins, fur, quills, etc are authentic and not rubber suits. Character movement, which took a leap forward for DreamWorks in last year’s Madagascar, improved here. RJ, Hammy, Ozzie & Heather, and the porcupine triplets move with such grace and fluidity. There is a subtlety to their facial expressions that gives a sincere feel to their emotional displays, and when combined with smooth physical movement, makes their performances feel genuine.

If Pixar (now officially owned by the Walt Disney Company, just a few weeks prior to this review) is like Disney in that the studio create animated feature films that focus on story and the art of animation, DreamWorks is like Warner Bros.’ Looney Tunes in that it emphasizes broad comedy (sketch, slapstick, situation, etc.) of varying appeal to adults, and it stresses caricature and cartoon-style drawing in the design of its characters. PDI also goes for the “squash and stretch” animation that marked the work of cartoon short directors like Tex Avery and Chuck Jones, so in many ways DreamWorks’ computer animated films are like Bugs Bunny, Daffy Duck, Road Runner, and Droopy cartoons.

While Over the Hedge occasionally drags in its first half, the voice acting comes together to strengthen both the film’s narrative and its message of family. The acting also makes for some surprisingly strong comedy. Bruce Willis, well known as an action movie hero, first came to fame in the romantic, detective comedy television series, “Moonlighting.” Audiences tend to forget his boyish charm and wit, his sharp sarcasm, and a sense of humor that make him a very good comic actor. It takes a bit of warming up, but he makes a great foil for Gary Shandling’s über-responsible family patriarch. Shandling also takes a bit of warming up to, but that’s true of most of the cast. The film’s writers play well to the actors’ strengths.

Who knew it was possible to get such excellent comedy out of the perception that William Shatner overacted in the original Star Trek TV series and films? Here, his penchant for over dramatizing or melodrama is turned into pure comedy gold. The writers also make good use of Wanda Sykes’ saucy personality and constant sarcasm, as well as her ability create characters that ingratiate themselves to others while still being a smart ass. By the end of the film, my favorite character by far was Steve Carell’s Hammy the squirrel. Carell can do manic, panic, and hyperactivity and can babble with the best. When combined with the superb character animation done on Hammy, Carell creates a memorable cartoon animal character – one worth seeing again.

Over the Hedge is also a good action comedy. The chase that closes its last act is almost as good as the kind of slam-bam showdowns in the Toy Story franchise and could rival a car chase in a Lethal Weapon movie. It’s this facility for action comedy and funny characters that makes Over the Hedge DreamWorks’ best non-Shrek film to date.