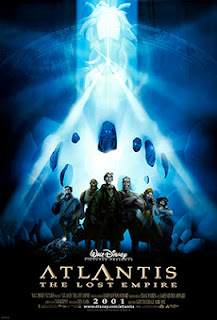 The subject of this movie review is Atlantis: The Lost Empire, a 2001 animated film from Walt Disney Pictures. It was the first science fiction film created by Walt Disney Feature Animation. Set in 1914, the film follows a young man and his crew as they search for the lost city of Atlantis.

Unjustly ignored, Atlantis: The Lost Empire is not only a very good film (probably the best animated feature the year of its release), but it is also another example of why Walt Disney continues to be the gold standard in animated feature films.

Directed by Gary Trousdale and Kirk Wise, co-directors of Disney’s Beauty and the Beast, Atlantis: The Lost Empire is the story of Milo Thatch (voice of Michael J. Fox), a young linguist who specializes in dead languages and who inherits his late grandfather’s obsession with the legendary lost city/state/continent of Atlantis. Milo joins a team of intrepid explorers searching for Atlantis as their guide because he can translate his grandfather’s book of Atlantean lore, which is also some kind of map to the lost empire.

Audiences and critics always expect the art of animation in a Disney film to be excellent even if the story isn’t. Both, in this case, are very good. From its 1914 urban setting to the journey into the ocean, through deep caverns, and to Atlantis itself, the animation is a scenic trip through the ability to not only draw beautifully, but to also tell a story with those drawings. The character designs by the great comic book artist Mike Mignola (Bram Stoker’s Dracula) are wonderful with their angular lines and wonderful curves. The animators took the designs and translated them into vibrant and interesting characters.

Screenwriter Tab Murphy (Disney’s Tarzan) crafted a script that captures the sense of wonder and awe of science fiction and fantasy films. It has the flavor of the 1999 remake of The Mummy and of Stargate. Not only is Atlantis: The Lost Empire a fine animated film, but also it’s a very good sci-fi. The film’s glaring weakness is in its stock characters - stereotypical ethnic characters, and unfunny comic relief, but those elements don’t hurt the film as much as they could.

Another part of the Disney magic is the voice cast, and Atlantis: The Lost Empire is no exception. In addition to Fox, James Garner, Claudia Christian, John Mahoney, Phil Morris, Leonard Nimoy, and Cree Summers among others deliver stellar work, a testament to their ability as actors to create characters.

Some of the computer animation seems awkward in the film, but much of computer generated imagery and all of its traditional cel animation is very good. Lost in the shuffle of the current wave of computer-animated films, Atlantis: The Lost Empire is a gem, an entertaining film for young and old, and an artistic achievement.