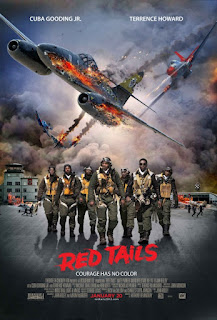 The subject of this movie review is Red Tails, a 2012 war film and historical drama produced by Lucasfilm and released by 20th Century Fox. Starring Terrence Howard and Cuba Gooding, Jr., Red Tails is a fictionalized portrayal of the Tuskegee Airmen, a group of African-American servicemen who served in the United States Air Force (USAAF) during World War II. George Lucas financed Red Tails (both production and distributions costs) and also directed re-shoots for the film.

Red Tails is set in Italy, 1944. The 332d Fighter Group of young African-American (called “Negroes”) USAAF pilots have already made it through recruitment and training in the Tuskegee training program. They have endured racism, and, now that they are in Europe, are still facing segregation from their white counterparts. In fact, they have not flown a single combat mission, but instead conduct strafing runs against German targets and also fly coastal patrols. Even their planes are secondhand, worn out Curtiss P-40 Warhawk aircraft.

Back in Washington, Colonel A.J. Bullard (Terrence Howard) is fighting the white bureaucracy to get his black flyers treated as equals. Meanwhile, in Italy, Major Emanuel Stance (Cuba Gooding, Jr.) is keeping his bored men in fighting shape. Opportunity comes when Bullard is asked to have his fighter pilots act as bomber escorts for the Boeing B-17 Flying Fortress bombers. There is an unacceptably high casualty rate among bomber crews mainly because of the actions of their current escorts. Bullard accepts and also manages to get new planes, North American P-51 Mustangs, for the 332d. With the tails of their aircraft painted bright red, these African-American flyers become known as the “Red Tails.” Now, can they prove themselves to the doubters?

Apparently, the critical consensus on Red Tails is that the film has “one-dimensional characters, corny dialogue, and heaps of clichés.” With the exception of Platoon and a few others, war movies are inherently clichéd. As for the corny dialogue, which is another staple of war films (old and new), that is true, but it is so infrequent that it stands out when someone does utter something trite or contrived.

As for the characters, they are anything but one-dimensional. They are fairly complicated, especially in terms of their motivations, external and internal conflicts, hopes, dreams, and fears. The screenplay is a bit light on the characters’ past, but the most important thing that the audience needs to know about the characters’ past is known. What is that? Well, that is the fact that they are black and that bigots and racists have been trying to hold them back and hurt them all their lives. “Nuff said.

Red Tails isn’t as heavy and dramatic as a war movie like Saving Private Ryan; in fact, sometimes, Red Tails’ drama is a little soft, like a sentimental television movie. Red Tails’ most potent drama comes from the aviation sequences, especially the aerial battles. When the Tuskegee airmen are in the air, the film soars. The scenes of aerial combat are exciting and skillfully executed, but what else would we expect from Lucasfilm, the people who gave us the soaring spacecraft in the Star Wars films.

Some viewers may be put off that Red Tails is a dramatic retelling of a real group of men and their exploits during World War II. Red Tails is more historical fiction than history, but it is still a truly exceptional film. I am just happy that someone made a film to acknowledge the contribution black servicemen made during World War II, because African-American are generally absent when Hollywood visits World War II. I bet many of those same people complaining about Red Tails’ historical inaccuracies never previously gave a thought to the absence of Black men in WWII films.

George Lucas’ 93 million dollar investment in this project is not at all wasted. It is a lovely gift to African-American history and film, and it is a damn good film, also. By the time Red Tails’ end credits faded away, I still could have watched another two hours just like it.