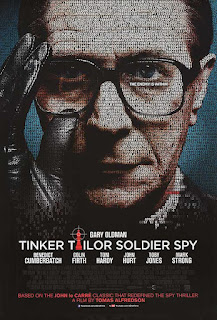 Tinker Tailor Soldier Spy is a 2011 British drama and espionage film. It is a co-production between British film production company, Working Title Films, and the French StudioCanal and is based upon John le Carré’s 1974 novel, Tinker Tailor Soldier Spy. The film is set in London in the early 1970s and focuses on an espionage veteran who returns from semi-retirement to uncover a Soviet agent working within British Intelligence. It is one of the best films of 2011.

In October 1973, Control (John Hurt), the head of the British Intelligence Service (known as “the Circus”), sends agent Jim Prideaux (Mark Strong) on a mission to Hungary, which goes badly wrong. Control and his right-hand man, George Smiley (Gary Oldman), are forced into retirement.

Later, Oliver Lacon (Simon McBurney), a civil servant in charge of intelligence, brings Smiley out of retirement. Lacon tells Smiley that Control, who is now dead, believed that the Soviet Union had managed to place a mole (or spy) in a senior role in British Intelligence and that the mole had been there for a long time. Control had assigned codenames to the senior intelligence officers that he suspected of being the Soviet mole. They are Percy Alleline, “Tinker” (Toby Jones); Bill Haydon, “Tailor” (Colin Firth); Roy Bland, “Soldier” (Ciarán Hinds); and Toby Esterhase, “Poorman” (David Dencik). Smiley takes the assignment only to learn that he is “Beggarman,” Control’s fifth suspect.

I could easily consider Tinker Tailor Soldier Spy a slowing moving spy movie, but I choose to view it as a delicious gumbo on simmer that slowly cooks to perfection. In this case, the perfection is the last half-hour of the movie, which is outstanding and begins with a brilliant scene featuring Smiley, Lacon, and a cabinet minister. Tinker Tailor Soldier Spy is the kind of dense and layered story an espionage film should be… at least when it’s not being a James Bond movie.

Of course, a film adaptation of John le Carré loses the depth, the morsels, and the back story of the novels. The film works because it is a character drama that takes the international intrigue that was the Cold War and transforms it into a conflict (a game, or even a war) between rivals, within and without British Intelligence. The story becomes one about personalities and indeed; the conflicts are more personal and more intimate than they are large-scale and extra-national or international. The movie is a story of lonely and desperate men who can never reveal their secrets to others, even to the point that they become a mystery to themselves.

Such a character drama relies on great performances, and there are many. Tom Hardy and Benedict Cumberbatch are excellent in strong supporting roles. David Dencik gives extra to Esterhase, enlarging a character that could have been not much more than a superficial little prick.

The most important performance is, of course, Gary Oldman’s. I’ve thought of him as a genius since I first started seeking out films in which he appeared some 20 years ago. He plays George Smiley as a tiger ready to pounce, as an intense man of action, and as the consummate spymaster who leads men and manipulates others to achieve his ends. What is amazing is that Oldman pulls this off by playing Smiley as a quiet, detached man, so that in the moments when he does strike, the viewer is both surprised at this sudden turn and also amazed at what Oldman is keeping under wraps as Smiley.

Tinker Tailor Soldier Spy is superbly directed by Tomas Alfredson and expertly written by the husband and wife team of Peter Straughan and the late Bridget O'Connor (to whom this film is dedicated). It is simply a great film. However, the strength of Tinker Tailor Soldier Spy is Gary Oldman, the master of this spy game and the winner of this chess match of espionage.