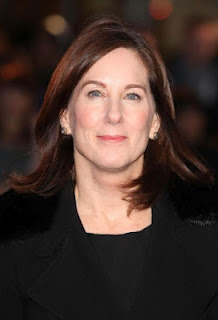 (Photographic image of Kathleen Kennedy is courtesy of Business Wire)

SAN FRANCISCO--(BUSINESS WIRE)--Lucasfilm Ltd. today announced that Kathleen Kennedy will become Co-Chair of Lucasfilm. In an effort to move forward with his retirement plans, George Lucas will work with Kathleen Kennedy to transition into her new role. Lucas will become Co-Chairman of the Board of Lucasfilm and continue as CEO. Micheline Chau will remain as President and COO of Lucasfilm, and continue to focus on the day-to-day operations of the business.

“I’ve spent my life building Lucasfilm and as I shift my focus into other directions I wanted to make sure it was in the hands of someone equipped to carry my vision into the future,” said George Lucas. “It was important that my successor not only be someone with great creative passion and proven leadership abilities, but also someone who loves movies. I care deeply about my employees—it is their creativity and hard work that has made this company what it is today. As the company grows and expands I wanted to be sure the employees of Lucasfilm have a strong captain for the ship. I also care deeply about our fans and it was important to have someone who would carry on the passion and care that I’ve given the films over the years. So for me Kathy was the obvious choice, she is a trusted friend and one of the most respected producers and executives in the industry.”

Director Steven Spielberg said, “George's prescience is once again proven by his choice of my long time producing partner, Kathy Kennedy to co-chair Lucasfilm. Kathy has been a member of both of our families going into a fourth decade so it does not feel like she is going to another galaxy far far away. She will get just as much support from me with Lucasfilm as George has given both of us all these years.”

“George is a true visionary,” said Kathleen Kennedy. “I’ve seen him build Lucasfilm from a small rebel unit in Northern California to an international fully integrated entertainment company. I’m excited to have the chance to work with such an extraordinary group of talented people. George and I have talked about the enormous opportunities that lie ahead for the company, and as George moves towards retirement I am honored that he trusts me with taking care of the beloved film franchises. I feel fortunate to have George working with me for the next year or two as I take on this role—it is nice to have Yoda by your side.”

Seven-time Academy Award nominated Kathleen Kennedy is one of the most successful and esteemed producers and executives in the film industry. As a producer she has an impeccable record with a robust filmography working with such filmmakers as Steven Spielberg, Peter Jackson, Martin Scorsese, Robert Zemeckis, Barry Levinson, Clint Eastwood, David Fincher and Gary Ross. As a testament to her standing in the film community, she previously held the position of governor and officer of the Academy of Motion Pictures Arts and Sciences (AMPAS) and currently serves as a member of the board of trustees. She is also a former President of the Producers Guild of America.

Kathleen will step down from her role at The Kennedy/Marshall Company, shifting her responsibilities to partner Frank Marshall. The Kennedy/Marshall Company is currently in post production on LINCOLN, directed by long time collaborator Steven Spielberg whom Kennedy also produced for on the INDIANA JONES and JURASSIC PARK franchises, and THE BOURNE LEGACY, written and directed by Tony Gilroy and produced by Marshall. Under the Kennedy/Marshall banner, the pair has produced such Academy Award nominated Best Picture films as WAR HORSE (six nominations), THE CURIOUS CASE OF BENJAMIN BUTTON (thirteen nominations) THE SIXTH SENSE, (six nominations) and SEABISCUIT (seven nominations), as well as blockbusters including the BOURNE series and THE ADVENTURES OF TINTIN. Marshall will oversee the company’s current slate of projects and continue to expand it via their development deals with DreamWorks and CBS TV Studios.


About Lucasfilm Ltd.
Lucasfilm Ltd. is one of the world's leading film and entertainment companies. Founded by George Lucas in 1971, it is a privately held, fully-integrated entertainment company. In addition to its motion-picture and television production operations, the company's global activities include Industrial Light & Magic and Skywalker Sound, serving the digital needs of the entertainment industry for visual-effects and audio post-production; LucasArts, a leading developer and publisher of interactive entertainment software worldwide; Lucas Licensing, which manages the global merchandising activities for Lucasfilm's entertainment properties; Lucasfilm Animation, which is currently producing content for film and television, including Star Wars: The Clone Wars, a CG-animated half-hour television series; and Lucas Online creates Internet-based content for Lucasfilm's entertainment properties and businesses. Additionally, Lucasfilm Singapore, produces digital animated content for film and television, as well as visual effects for feature films and multi-platform games. Lucasfilm's motion-picture productions include three of the 20 biggest box-office hits of all time and have received 19 Oscars and more than 60 Academy Award nominations. Lucasfilm's television projects have won 12 Emmy Awards. Lucasfilm Ltd. is headquartered in San Francisco, Calif.
Posted by Leroy Douresseaux at 6:29 AM