"Superman/Batman: Public Enemies" is Friendly to the Viewer 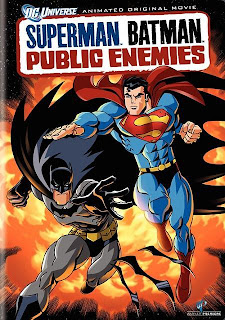 The film is adapted from the opening story arc of the Superman/Batman comic book series. The storyline was entitled “The World’s Finest” (Superman/Batman #1-6, October 2003 to March 2004) and was produced by writer Jeph Loeb and pencil artist Ed McGuinness. Bruce Timm acted as the film’s executive producer.

At the beginning of Superman/Batman: Public Enemies, Lex Luthor (Clancy Brown), Superman’s nemesis, uses a severe, nation-wide economic crisis to get himself elected President of the United States. Then, he uses the threat of a kryptonite meteor on course to strike Earth as a rationale to frame Superman (Tim Daly) as a mad criminal. Luthor hires cyborg villain, Metallo (John C. McGinley), to kill Superman, but Batman (Kevin Conroy) rescues the Man of Steel. Luthor uses the video footage of that battle to frame Superman, and he also places a one billion dollar bounty on his head.

An army of supervillains look to collect the bounty on Superman, and Luthor also sends a small group of government-employed superheroes, led by Captain Atom (Xander Berkeley), to arrest Superman. Can Superman and Batman escape their hunters, save Earth from Luthor’s plot, and stop a killer meteor?

When I first started watching Superman/Batman: Public Enemies, I didn’t like it. For one thing, the filmmakers had copied the cartoony drawing style of Ed McGuinness, who drew the comic book upon which this film is based, in their character designs for this film. I didn’t think that worked. However, McGuinness’ drawing style is a traditional one closer to the comic books published in the 1950s and 60s, and this clean style is also friendlier to adaptation as animation than other more detailed or photo-realistic comic book art styles.

So that is my way of saying that visually, the design style and graphic aspects look right for this film. They capture the physicality of the characters and the colorful and quirky costumes and armor. As for the story, it’s very fun with lots of big fights and plenty of sci-fi, save-the-world action.

I have to also say that this DC Universe Animated Original Movie has excellent voice performances from top to bottom. Clancy Brown is ominous and also melodramatic in the vein of an old movie serial villain as Lex Luthor. Tim Daly and Kevin Conroy are a magnificent team as Superman and Batman, respectively. They sound as if they belong together. I am pleased to be pleasantly surprised by Superman/Batman: Public Enemies. As this movie ended, I still wanted more.