"A Guy Named Joe" is Sweet and Sentimental 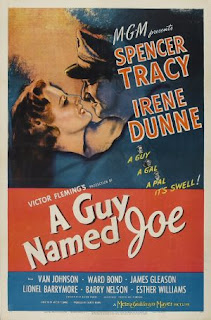 In Victor Fleming’s sentimental and patriotic film, A Guy Named Joe, the spirit of a World War II bomber pilot who died in combat plays guardian angel to a younger pilot who also romances his old girlfriend. The film is hokey and even corny at times, but it’s a wonderful, gentle, and poignant film that plays romantic with the tragedy of World War II as the backdrop.

Major Peter Sandidge (Spencer Tracy) is a daredevil bomber pilot who has a knack for getting under his superiors’ skin with his reckless flying, and, while some may see his attitude and aggressiveness in combat as courageous, others see it as crazy. The latter might include Pete’s girlfriend, Dorinda Durston (Irene Dunne), who is also a pilot and his wife-to be. However, Major Sandidge’s plane is shot down and crashes into the ocean during a reconnaissance mission. After death, he finds himself in heaven and under the command of The General in Heaven (Lionel Barrymore). The General directs the spirits of pilots killed in the air, to return to earth where they act as guardian angels and quasi-guidance counselors to young pilots-in-training.

Accompanied to earth by Captain Dick Rumney (Barry Nelson), another angel and the spirit of a pilot he knew that died before him, Pete begins to train new pilots. He becomes an angel to Ted Randall (Van Johnson), a young college grad and recent heir to an enormous fortune. Pete likes Ted enough, and follows him around giving him advice that Ted, who of course doesn’t know his guardian angel is near, receives the advice sort of like a gentle and prodding thought. However, Pete begins to dislike Ted when he falls madly in love with Pete’s old gal, Dorinda, who is still carrying a torch for Pete. When Pete asks Dorinda to marry him and she accepts, Pete becomes jealous and decides to give the newly commissioned Captain Ted Randall nothing but bad advice. Still, Pete has to reconsider his actions when Ted accepts a dangerous bombing mission from which is highly unlikely to return, and Dorinda risks own her life to protect Ted.

Although this film features several superbly staged battle scenes and air attacks, A Guy Named Joe is nevertheless sweet and sentimental. While the cast is mostly good, it is Spencer Tracy who keeps this movie from being sappy. He is far and away the star of the picture and everyone else, including Ms. Dunne and Van Johnson’s characters, is a supporting player. Tracy was a fine actor, even in a time when film personality was more important than acting prowess, and Tracy gave films (as he does so in this one) an artistic and weighty center. Ms. Dunne’s performance is good, but not outstanding, although it’s not her fault. Dorinda is conceptually a good and (for that time) groundbreaking female part, but the script mostly regulates her to being a stereotype. Barry Nelson and Lionel Barrymore give exemplary supporting performances as Pete’s heavenly colleagues, while Don DeFore and Ward Bond are excellent earthly supporting players.

Victor Fleming’s directorial effort is exceptional. He makes A Guy Named Joe a credible fantasy film, while holding onto the film’s war story elements without using a heavy hand. Though saddled with a punch-drunk script, Fleming clearly got the spirit of David Boehm and Chandler Sprague’s original story (for which they received an Oscar nomination in the category of “Best Writing, Original Story”), and that’s what makes A Guy Named Joe a swell romantic fable about a guy, his girl, and the rival who becomes “his boy.”