"The Secret World of Arrietty" is a Beautiful World 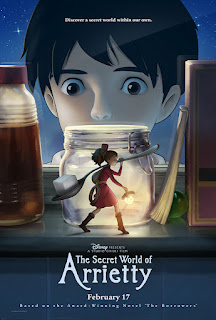 Arrietty (or Kari-gurashi no Arietti) is a 2010 Japanese animated fantasy film produced by Studio Ghibli, best known for the animated films of director Hayao Miyazaki, who co-wrote Arrietty. Walt Disney Pictures released Arrietty earlier this year in the United States as The Secret World of Arrietty. Directed by Hiromasa Yonebayashi, Arrietty is an adaptation of the 1952 children’s fantasy novel, The Borrowers, by Mary Norton. The film focuses on a tiny girl and how her interaction with a human threatens her family’s existence.

The Secret World of Arrietty is set in a rural home that is surrounded by a lush garden and a verdant forest. Under the floorboards of the house lives a family of four-inch-tall people, the Clock Family (although that surname is never used in the film). They are “Borrowers,” tiny people who survive by “borrowing” simple items from the houses in which they live. They avoid humans, whom they call “beans” (a mispronunciation of “human beings”).

The Clocks are the father, Pod (Will Arnett); the mother, Homily (Amy Poehler), and their spirited daughter, Arrietty (Bridgit Mendler). Their lives change when a young man named Shawn (David Henrie) spots Arrietty in the garden. The house in which the Clocks live is the childhood home of Shawn’s mother, and the 18-year-old Shawn is visiting the home where he will rest before having a delicate surgery. Arrietty and Shawn are curious about each other, although Arrietty’s father is adamant that she avoid him. Their mutual fascination becomes dangerous when the house’s caretaker, Haru (Carol Burnett), also becomes curious about the mysterious “little people.”

The art of hand-drawn animation or, as its now known, 2D animation, is really an art in the hands of the highly talented and skilled animators working for Walt Disney Pictures. Over the better part of eight decades, Walt Disney’s 2D animated films proved that. The same can be said about Studio Ghibli and Hayao Miyazaki. Miyazaki is a master and his studio is filled with talented illustrators, designers, painters, etc. who are museum-worthy artists.

In the setting that is The Secret World of Arrietty, Ghibli creates the illusion of space, depth, and presence as well as any 3D computer-animated film. Pixar and DreamWorks Animation don’t have anything over Ghibli in terms of creating layered and textured environments. Such elements as drops of rainwater or tea, thriving and animated plant life, and the everyday-items that fill the Clocks’ home seem solid and real. The paintings used to create the film’s backgrounds recall the paintings of Monet. I could spend all day praising the animation of Studio Ghibli, because hand-drawn animation doesn’t get much better than The Secret World of Arrietty.

The story is the part of The Secret World of Arrietty that doesn’t live up to the quality of the animation. The film is charming and imaginative, but is also surprisingly melancholy, even cynical. Being that the film takes the viewer into an alien world and successfully presents it from the perspective of the aliens (the Borrowers), one would think The Secret World of Arrietty would be about discovery, yet it doesn’t do much discovering. It is an uncomplicated tale of friendship that pales in comparison to its extraordinary setting.

The film only brushes the characters, choosing to emphasize their actions, rather than delve into their personalities and even the mysteries of their pasts. Who are they? What are their wishes and desires? Still, Bridgit Mendler and Will Arnett are excellent in their voice performances and make their characters stand out. Even with my complaints, you’d be surprised that I really think a lot of this film. The Secret World of Arrietty is visual splendor and that makes up for the film’s tepid pace, indifferent drama, and lack of characterization. It must be the magic of Studio Ghibli that always seems to cast a spell on me. I actually want to visit The Secret World of Arrietty again.