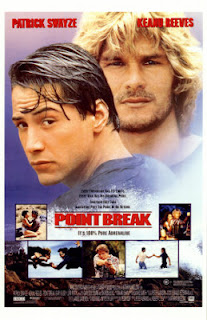 The subject of this movie review is Point Break, a 1991 action film and crime drama from director Kathryn Bigelow and starring Patrick Swayze and Keanu Reeves. The title, “Point Break,” refers to a surfing term, and the film follows an undercover FBI agent who infiltrates a band of bank robbers who are also surfers.

Keanu Reeves wasn’t a good actor early in his career, but it was obvious from the moment he started appearing in films in the mid to late 1980’s, that he had star quality – that something, that essence that makes the camera love him. A skillful director can manage a real movie star’s deficiencies and make a credible film, which is what director Kathryn Bigelow did in the 1991 summer action flick, Point Break.

Young FBI Special Agent Johnny Utah (Keanu Reeves) goes undercover and joins a group of surfers while searching for a gang of bank robbers. Calling themselves the “Ex-Presidents,” each member of a bank-robbing quartet wears a Halloween rubber mask of one of four former presidents, and they’ve successfully pulled off 30 robberies in the Los Angeles area in three years without being caught. The FBI is puzzled, but Utah and his veteran partner, Angelo Poppas (Gary Busey, being a ham and generally acting nuts), believe they have an angle on catching the robbers. Angelo is sure that the thieves are surfers, and he convinces Utah to take up the sport.

Johnny meets girl surfer, Tyler Ann Endicott (Lori Petty), and convinces her to teach him to surf. Johnny eventually meets Tyler’s former boyfriend, Bodhi (Patrick Swayze), the leader of a small circle of local surfers. Bodhi takes a liking to Utah and quickly draws him into the surfing subculture. Entangled in this new lifestyle, Utah earns the ire of his boss, FBI Agent Ben Harp (John C. McGinley), and when Utah later discovers the identity of the Ex-Presidents, he finds himself ensnared in a trap of his own making.

Point Break was the movie that established Keanu Reeves as a convincing action star, when up to the time of this film, he’d mostly played naïve and/or goofy boys in a series of comedies and dramas (including Dangerous Liaisons, believe it or not). Overall, the acting here is mostly mediocre to bad, and the dialogue is a combination of hokey surf philosophy and the kind of phony law enforcement dialogue frequently found in cop movies. All of it sounds the worst coming from Reeves. However, the film features striking aerial photography and beautiful cinematography. Bigelow skillfully stages all the actions scenes to get the most out of them – including a thrilling scene when Utah chases Bodhi on foot. Point Break isn’t great, but the surfing and masked bank robbers angles make it memorable and definitely worth a view.