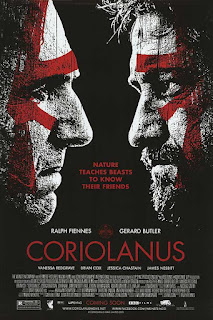 The subject of this movie review is Coriolanus, a 2011 military drama starring Ralph Fiennes and Gerard Butler. The film is based on William Shakespeare’s tragedy, Coriolanus, which was based on the story of a legendary Roman general. The film is Fiennes’ directorial debut and is the story of a banished Roman hero who joins Rome’s enemy to take his revenge on the city.

Coriolanus is set in “a place calling itself Rome” (but the movie was filmed in Serbia). General Caius Martius (Ralph Fiennes) leads the forces of Rome to victory against Volsces and the leader of its forces, Tullus Aufidius (Gerard Butler). Martius should be the hero of Rome, beloved by all, but the citizens of Rome are hungry. He may be a great soldier, but Martius despises the people for whom he supposedly fights. Martius is elected as a consul to the Roman Senate, but his inflexible self-belief and extreme views present an opportunity for his enemies. Before long, Martius finds that some of his friends have turned to enemies, but some of his enemies may become his friends.

Throughout my schooling, teachers told me that Shakespeare’s work was timeless, and Coriolanus certainly has contemporary parallels. Caius Martius’ story is a familiar one. He is the proud warrior who saves the state, but who is despised by the citizenry and politicians. The politicians wish to exploit him and have little or no use for him otherwise. Those politicians also loath that he fought when they did not – either because they could not or chose not to.

As a director, Fiennes makes smart choices, including having the accomplished John Logan as his screenwriter. He also surrounds himself with a strong supporting cast; Brian Cox as Menenius and Venessa Redgrave as Volumnia (Martius’ mother) are just plain great. Fiennes’ inexperience as a director, however, shows in some scenes, especially those that make up the first hour of the film. This first half of Coriolanus drifts and the use of Shakespeare’s dialogue seems out of place in the film’s modern Eastern European setting.

The second half of the film is strong and passionate, and that’s where Fiennes’ talents show. He knows great performances and first-rate acting, and he gets that from his cast. Fiennes lets Gerard Butler do what he does best – smolder. Coriolanus is not the best film adaptation of Shakespeare, but the good acting and the subject matter make it one worth watching in these times.