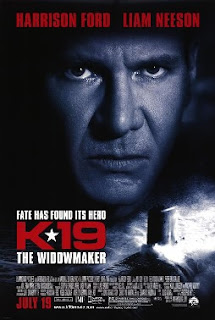 Based upon actual events, K-19: The Widowmaker is the dramatization of the inaugural voyage of the Russia’s first nuclear ballistic submarine, which suffered a nuclear reactor malfunction during its maiden voyage in the North Atlantic in 1961. The film begins in the midst of the nuclear arms race between the United States and the Soviet Union. K-19, called “the Widowmaker,” because of the number of men who have died working on the sub before it even launched, is the Soviet Union’s attempt to catch up to the U.S., which already has nuclear-powered (and armed) submarines.

The film fictionalizes the relationship between the unyielding Captain Alexei Vostrikov (Harrison Ford) and his second in command, Captain Mikhail Polenin (Liam Neeson), who was K-19’s Captain until politics unseated him. The two men and their gallant crew must race against time to prevent a nuclear explosion that would destroy them and inadvertently ignite a world war between the Soviets and the Americans, but the crew also finds itself caught between the two captain’s test of wills.

Kathryn Bigelow’s K-19: The Widowmaker does the fine old genre of submarine movies proud by telling an astonishing true story as an engaging and riveting dramatic tale of survival, grace under fire, and solidarity among military men. This absorbing and scary flick is a testament to Bigelow’s technical skill as a filmmaker. One would think that as a woman, she would focus primarily on character and relationships, but Bigelow is a whiz at staging big action sequences, thrilling chases, and the kind of violent confrontations for which male action movie directors are known.

When this film was first released, some critics took issue with Harrison Ford’s weak Russian accent, which comes and goes (but is quite strong in the movie’s closing sequences), but the way Ford plays the character hits the right note. Ford finds a way to balance his Vostrikov for the way Liam Neeson plays Polenin, and Ford clearly understood the role both characters played in the larger narrative. Ford and Neeson fit their characters neatly into the context of the other characters and the setting. Together they sell K-19: The Widowmaker’s central conflict – Polenin versus Vostrikov, while making neither man a villain, because Christopher Kyle’s excellent screenplay gives both men ample opportunity to be heroic.

A winning adventure at sea and (Cold) war movie, K-19: The Widowmaker respects its audience, and the smart viewer who is willing to engage this film will find a treasure beneath the waves.