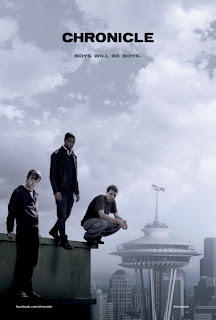 SCI-FI/THRILLER with elements of horror

Chronicle is a 2012 science fiction thriller and teen drama. The film follows three high school friends who gain superpowers and how those powers change them.

Seattle teenager Andrew Detmer (Dane DeHaan) is a loner who starts videotaping his life. His mother, Karen (Bo Petersen), is dying of cancer, and his father, Richard (Michael Kelly), is an abusive alcoholic. Although Andrew is unpopular at school, he does have one friend, his cousin, Matt Garetty (Alex Russell).

Matt invites Andrew to a rave in a bid to help him meet people. However, Andrew ends up taking a trip into the nearby woods with Matt and popular student, Steve Montgomery (Michael B. Jordan). There, they make an incredible discovery that gives them superpowers. At first, they have fun with the new powers, but when they begin to embrace the darker aspects of those powers, their lives begin to spin out of control.

Chronicle reminds me of Carrie, the 1976 Brian De Palma film based upon Stephen King’s 1974 novel of the same name (King’s debut novel). Carrie freaked me out when I first saw it as a child, and I have not been able to watch it since then. Chronicle doesn’t freak me out; it is much slicker than the edgy, odd, and dark Carrie. Chronicle is a shiny bauble structured to make its self-absorbed characters seem thoughtful and self-analytical to its self-absorbed target audience.

Director Josh Trank and screenwriter Max Landis are good at capturing the fun and hijinks of the teenaged boys as they experiment with their powers. I do believe that it is realistic to depict these youngsters as careless enough to test their powers out in public and also to think nothing of filming themselves using those powers. I think that Trank and Landis’ best idea is that when things start to get out of control, they really get out of control. As these young men become more reckless, the story turns wild and unbound. The movie embraces the dark side that is these young fools acting like demigods.

I didn’t know what to expect of Chronicle, but I did want to see it. Now, that I’ve seen it, I want more. It ia great science fiction thriller, but it is also something of a horror movie. When the young men start to embrace the darker aspects of what their powers can do, it is mesmerizing. It is also very scary, because for all that is cool about Chronicle, the film is also about the predatory side in each person.