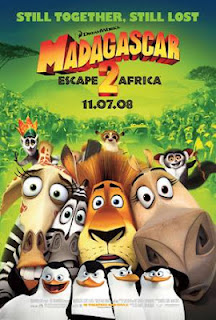 Alex the Lion (Ben Stiller) was the king of New York City. Actually, he was the king of the animal attractions at New York City’s Central Park Zoo. He and his friends: Marty the Zebra (Chris Rock), Melman the Giraffe (David Schwimmer), and Gloria the Hippo (Jada Pinkett Smith), had lived at the zoo practically their entire lives. However, a series of events found them stranded on the exotic island of Madagascar. Four crafty Penguins: Skipper (Tom McGrath), Kowalski (Chris Miller), Private (Christopher Knights), and Rico (John DiMaggio) were also stranded with them.

In Madagascar: Escape 2 Africa, Alex and friends and the penguins hope a rickety airplane can get them back to New York. The Madagascar lemurs: King Julien (Sacha Baron Cohen), Maurice (Cedric the Entertainer), and Mort (Andy Richter) join them on a flight that goes bad quickly. Now, the group is stranded in continental Africa, where Alex (whose birth name is “Alakay”) is reunited with his parents, his father, Zuba the Lion (Bernie Mac), and his mother, Florrie the Lioness (Sherri Shepherd). It is a happy reunion until a rival, Makunga the Lion (Alec Baldwin), hatches a plot to use Alex to unseat Zuba as king of the pride.

Madagascar: Escape 2 Africa is an exceedingly family-friendly film; for a DreamWorks Animation production, it has surprisingly little scatological humor or romantic innuendo. The story is rife with themes built around family and friendship, and it emphasizes that friends can also be another kind of family. Escape 2 Africa is all about love, and in this story, love means understanding and then, acceptance.

I find the last half hour of this film to be much better than the rest. Getting the duet featuring Alex and Zuba makes watching this movie worth the time spent. As was the case with the first film, there is a subplot featuring the Madagascar penguins, who are some of my all-time favorite animated characters. This plot involves some tourists and hundreds of monkeys, and it’s like its own mini-movie – a good mini-movie.

Like the first film, Escape 2 Africa has great production values. The character animation and the overall film design and art direction are beautiful; this is the computer animation equivalent of The Lion King, one of Walt Disney’s most gorgeous and visually striking films. Madagascar: Escape 2 Africa won’t have the place in film history that The Lion King has, but I love this movie’s almost-obsession with being about family and friends. It is a movie that has just enough balance to get parents to watch it with their children.