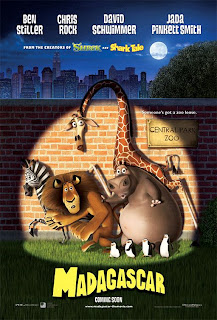 The subject of this movie review is Madagascar, a 2005 computer-animated film from DreamWorks Animation. The film focuses on a group of zoo animals accidentally shipped to Africa.

Alex the Lion (Ben Stiller) is king of the animal attractions at New York City’s Central Park Zoo. He and his friends: Marty the Zebra (Chris Rock), Melman the Giraffe (David Schwimmer), and Gloria the Hippo (Jada Pinkett Smith) have lived there their entire lives. However, on the day of his tenth birthday, Marty begins to wonder what life outside the zoo – in particular life in the wild, would be like. With the help of four crafty penguins, Marty escapes the zoo for an overnight excursion. When his friends discover him missing, they also leave the zoo to rescue him.

The quartet attracts so much attention, and the sight of Alex the Lion running loose and free scares many New Yorkers. After the quartet is captured, they along with some other animals who escaped (two monkey’s and those darned penguins, again) are put on a cargo ship to be transferred to a zoo in Kenya. Once again, the penguins cause trouble and sabotage the ship, inadvertently causing Alex, Marty, Melman, and Gloria to be stranded on the exotic island of Madagascar. Now, the quartet has to learn to survive in this lush jungle paradise, but Marty, Melman, and Gloria discover, much to their chagrin, Alex’s wilder side.

Madagascar is the fifth feature-length computer animated film from DreamWorks through their computer animation studio, PDI (DreamWorks Animation). With each film, the art and craft of PDI’s computer graphics and animation markedly improves. In terms of the “drawing” style, this film is closer to the Warner Bros. cartoon shorts of the 1930’s and 40’s, in particular the work of cartoon directors Tex Avery, Chuck Jones, and Bob Clampett. The characters are designed to look 2D (two-dimensional), like the hand drawn cartoon characters featured in the aforementioned trio’s legendary work, although the Madagascar’s characters exist in the 3D (three-dimensional) world of computer animation.

How did PDI successfully create a computer animated film that looks like classic “cartoony” animated cartoons of yesteryear? What makes this work is that they mastered “squash and stretch,” the process which animators use to deform an object and then snap it back into shape to portray motion or impact. The ability to squash and stretch is essential to cartoon slapstick comedy such as the Road Runner cartoons. While squash and stretch are easy for animators to do with a pencil in hand-drawn/2D animation, it is more difficult for computer animators to do. DreamWorks Animation has successfully moved to the next level in terms of the quality of their work by creating characters that stretch and expand. It’s a film that able captures the manic energy of Avery, Jones, and Clampett’s Warner Bros. cartoons.

The animation of human characters and the layout, lighting, and set designs of human environments is shocking in how good it looks, but once the narrative moves to Madagascar the character animation really takes off. The characters bend, twist, elongate, and expand in a constant barrage that has the manic energy of classic cartoons. This also helps to sell a limp concept.

The plot is a basic fish-out-of-water tale without much imagination. The characters, except for the penguins, aren’t exceptional or memorable. They are good for some laughs, but they lack the zip, zest, or tang of cast of the Shrek franchise. The buddies of this buddy film, Alex and Marty, have some chemistry, but aren’t that dynamic a duo. Actually, the animals and the actors that give voice to them (Stiller, Rock, Schwimmer, and Ms. Jada) have the best chemistry as either a trio or a quartet. Put three or four together, and the film sparkles and splashes over with slapstick comedy that works. Cut the quartet in half and the narrative loses its energy.

Overall, Madagascar is a pleasant family comedy with some exceptionally strong humor that should appeal to adults; plus, the film references lots of other movies, and that keeps older viewers interested. DreamWorks Animation hasn’t yet reached Pixar, the gold standard in computer animation, but the quality of entertainment in Madagascar proves that the studio can deliver high-quality, if not classic, animated entertainment.