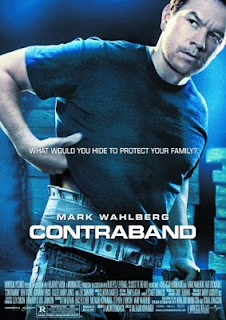 Contraband is a 2012 crime thriller starring Mark Wahlberg. It is a remake of Reykjavik-Rotterdam, a 2008 film from Iceland. Contraband’s director, Baltasar Kormákur, starred in the original film. Contraband is about a former smuggler who temporarily returns to smuggling in order to protect his brother-in-law from a violent street-level drug lord.

To pay back Andy’s debt to Briggs, Chris sets up an operation to smuggle ten million dollars in high-end counterfeit money out of Panama and back into New Orleans. To protect his family from Briggs’ threats, Chris asks his old partner, Sebastian Abney (Ben Foster), to watch over Kate and the children. However, there are many others players in this game, both in New Orleans and in Panama, and this contraband run will put all of Chris’ smuggling skills to the test.

I consider time spent watching a Mark Wahlberg movie (one in which he is the lead or one of the major characters) to be time well spent, and Contraband was time well spent. I enjoyed the hell out of it. The film is plot heavy with a large cast of characters, and both elements are well done. However, the film focuses on the plot, subplots, and all the twists and turns they take, more than it ever delves into the characters.

That is a shame because there are some good supporting characters and some good supporting performances. I generally like everything Giovanni Ribisi does, and he is Oscar-worthy as the crazy mutha, Tim Briggs. The always-reliable J.K. Simmons is riotous as the butt-hole-ish, Captain Camp. Even Kate Beckinsale manages to eek out some intensity as the wife/female victim, Kate Farraday. With more emphasis on character development and character drama, Contraband could have been a great film. Instead, it is just a really good film. Oh, well.

The focus is, of course, on the star, and Mark Wahlberg is a fine actor and a true movie star. Movie stars carry movies, and Wahlberg’s streetwise, don’t-mess-with-me, don’t-betray-me, screen persona is alluring – at least to me. If you like Mark Wahlberg, you will probably like Contraband. If you like crime thrillers, Contraband is criminally thrilling.