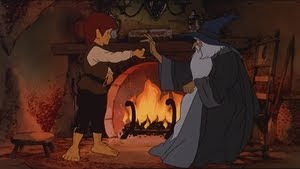 "The Lord Of The Rings Remastered Deluxe Edition

" is coming April 6, 2010 from Warner Home Video. This original animated classic from acclaimed director Ralph Bakshi and Academy Award Winning producer Saul Zaentz has been remastered with pristine New Dolby 5.1 audio and picture quality and will be distributed as a single disc DVD and Blu-ray combo which features a Blu-ray, DVD and bonus digital copy. The film will also be available for Digital Download. This film is rated PG.

One of the great visionary animation directors of the modern era, Bakshi went to artistic extremes to meticulously bring the legendary world of J.R.R. Tolkien to animated life – adding yet another stunning title to the director’s canon of ground-breaking films. Bakshi’s animation accomplishments include Fritz the Cat, Heavy Traffic

All the magical adventure of the fantasy classic comes to life in Bakshi’s brilliantly animated tale of the enchanted land of Middle-earth – and the brave band of hobbits, heroes and wizards who set out to protect it. When a dangerous and powerful gold ring falls into his hands, a courageous hobbit named Frodo embarks on an epic adventure. Along with the mighty wizard Gandalf and some daring elves, he defends his homeland from the Dark Power who would destroy it. Set in a mystical age of magic, monsters and unlikely heroes on incredible journeys, The Lord of the Rings will cast its spell over the entire family!

The deluxe edition also features a never-before-seen, 30-minute in-depth interview with legendary director Ralph Bakshi entitled "Forging Through The Darkness: The Ralph Bakshi Vision for The Lord Of The Rings." This special feature explores his concept for creating an illustrated film, his pioneering rotoscoping process, and inspirations for his visual storytelling.
Posted by Leroy Douresseaux at 10:58 AM