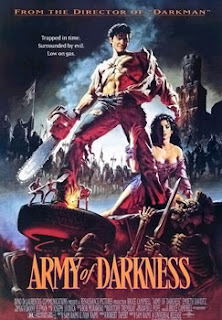 The subject of this movie review is Army of Darkness, a 1992 comic horror film from director Sam Raimi. The film, which was released in the United States in February 1993, is the third and final film in The Evil Dead trilogy.

Bruce Campbell reprised the role of Ash, the demon-besieged hero he portrayed in director Sam Raimi’s Evil Dead series, in the 1993 film, Army of Darkness, Raimi’s (kind of) sequel to Evil Dead 2. This time Ash is the head store clerk in the housewares department at S-Mart. As the film opens, Ash narrates the back story of how he and his girlfriend were vacationing in a secluded cabin when all hell (literally) breaks loose. Eventually, demonic time warp sucks Ash and his ’73 Oldsmobile into a vortex that transports them to Dark Ages England, and here the fun begins. To go back to his own time, Ash has to find the Necronomicon (Book of the Dead), an ancient tome bound in human flesh and inked in blood, but Ash doesn’t properly recite an important incantation that goes with the book. This error awakens legions of undead beasts and an army of skeletons, and led by Ash’s diabolical twin, Evil Ash, this army of darkness marches against a small castle and its inhabitants, and only Ash can save them. Will he?

Raimi’s Army of Darkness is a delightful and hilarious sword-and-sorcery mini-epic – a kind of lighted hearted and much smaller version of The Lord of the Rings film trilogy released eight years before LOTR saw the light of day. Bruce Campbell’s Ash is a charming rogue brought together by Campbell’s occasionally hammy acting and his exuberant love of being of in movies; the man never disappoints because he buys into the film fantasy as much as actors way more talented than him.

Sam Raimi was obviously a talent with a knack for filmmaking, as seen in his early low-budget films. Although the Spider-Man film franchise would make him an A-list director, Army of Darkness showed that Raimi loved making movies and always made the best of what he had. I doubt any director other than Raimi (even Spielberg) could, in 1993, make an army of stop-motion skeletons look funny and cool rather than be an embarrassment on the screen, but this was Raimi passing on his joy of making fun fantasy movies to the audience.

For all its hokiness and in spite of its old-fashioned special effects, Army of Darkness is a very good film. Its cheesy looks belie a joyful heart, and I wished more genre filmmakers would deliver movies made by the “seat of their pants” that look like this. Army of Darkness is Saturday matinee gold – pure and simple.