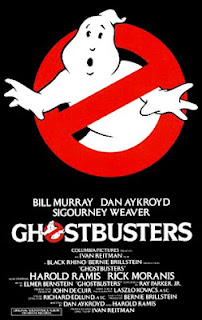 The subject of this review is Ghostbusters (originally titles Ghost Busters), 1984 supernatural comedy film produced and directed by Ivan Reitman. The film starred Bill Murray, Dan Aykroyd, Sigourney Weaver, and Harold Ramis and was written by Aykroyd and Ramis, apparently with some contributions from costar, Rick Moranis.

Doctors Peter Venkman (Bill Murray), Raymond Stantz (Dan Aykroyd), and Egon Spengler (Harold Ramis) are three unemployed parapsychology professors who set up a ghost, spirit, and spectre removal service called Ghost Busters. They successfully chase haunts and poltergeists, and they eventually earn so much cash and business that they have to hire a man off the street, Winston Zeddemore (Ernie Hudson), to become the fourth Ghost Buster agent. Things are going well, until Venkman has his eye on Dana Barrett (Sigourney Weaver), a musician who comes to the Ghost Busters with a problem. Her refrigerator has a demon in it, and that’s the first sign of the apocalyptic arrival of a Sumerian god bent on destroying the world.

Months after it was released in 1984, Ghost Busters became the highest-grossing comedy film ever made. It was and is a well written comedy with well-developed elements of fantasy, but most of all the fine cast of comic actors served Ghost Busters quite well. The best of the lot is Bill Murray, whose dry wit and sarcasm, as well as his deadpan delivery, made audiences willing to suspend their disbelief for this film. Somehow, Ghost Busters comic tone blended very well with the film’s low rent sci-fi and horror elements. The comedy worked, and the ghosts were so light and airy that it was hard to take them seriously, but at the same time not quite possible to dismiss them.

Actually, all the filmmakers were pretty sharp in their efforts. Ghost Busters was merely another example of director Ivan Reitman’s deft touch as a director of comic films, and the film’s writers, Ramis, Aykroyd, and Moranis (not given screen credit) are all funny guys who came up with a novel story. Together their film has stood the test of time, and there’s very little to criticize about it, though the film is a tad bit long and the final showdown is kind of loopy. This is a great screen comedy that I’d heartily recommend.