Review: Snow White and the Huntsman 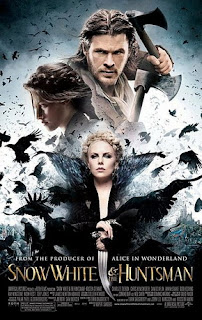 The film opens in the Kingdom of Tabor, where King Magnus and Queen Eleanor welcome a baby daughter they name Snow White. Sometime after Eleanor dies, Magnus marries the mysterious Ravenna (Charlize Theron), who turns out to be a powerful sorceress. After usurping the throne, Ravenna imprisons Snow White (Raffey Cassidy) in the north tower of the castle. With her brother, Finn (Sam Spruell), at her side, Ravenna rules over the kingdom, while draining the youth from young maidens in order to maintain her own youthful appearance.

After coming of age, Snow White (Kristen Stewart) escapes into the Dark Forest. Ravenna orders Eric (Chris Hemsworth), a huntsman, to find Snow White, but Snow White’s destiny may prove to be bigger than any one person’s plans for her.

I discovered that Snow White and the Huntsman is the first feature film directed by Rupert Sanders, which may explain why the movie’s narrative develops in fits and starts. Sometimes, Snow White and the Huntsman is overly serious, and sometimes, it is painfully dull. It’s as if Sanders wants to treat some of the movie as if it were Lord of the Rings (which it is not). When he’s not trying to do his own version of director Peter Jackson, Sanders is trying to create some character drama and that’s mostly awkward.

First, let me say that I am a fan of Kristen Stewart. I think Stewart is perfect for Sanders, because, as an actress, she is overly serious. In practically any movie in which she appears, Stewart will spend part of that film kind of hunched over, like a dog waiting to be smacked across the head with a newspaper even when she does something good (like rescue Timmy from a well). I could be nice and say that her acting is decent, although she delivers dialogue with all the stiffness of a graduate of the Keanu Reeves School of Acting. Her big speech scenes in the last act of Snow White and the Huntsman are not inspiring and are, in fact, dry as dust.

Chris Hemsworth and Charlize Theron try, and Theron really tries, but the script seems unsure about what it should be – action movie or fantasy drama… or Evil Queen movie? The script isn’t even sure who the lead character is, and I’m not sure Sanders knew which characters should be the focus and when they should be. This movie should have been titled “Sometimes Snow White and sometimes the Huntsman and sometimes the Queen.”