Catch "Virus" When You Need a B-Movie 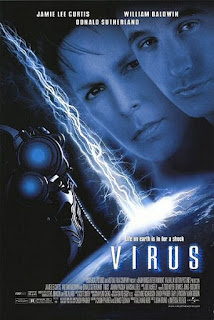 The subject of this movie review is Virus, a 1999 science fiction-horror film. The movie is based upon the 1992 comic book miniseries, Virus, which was created and written by Chuck Pfarrer, drawn by Howard Cobb and Jimmy Palmiotti, and published by Dark Horse Comics.

A crippled salvage tug, the Sea Star, seeks refuge in the calm eye of a typhoon. The crew discovers a seemingly abandoned and ghostly silent Russian research vessel. The Star’s captain, Robert Everton (Donald Sutherland), seeks the potentially lucrative salvage rights for the ship, but the Star’s navigator, Kit Foster (Jamie Lee Curtis), and chief engineer Steve Baker (William Baldwin) sense wrongness about the ship. Their suspicions are justified when they find the Russian ship’s sole survivor, chief science officer Nadia Vinogradiya (Joanna Pacula) who is deathly afraid of something mysterious and malevolent, an alien virus or life form that is loose on the ship. The virus takes over machines and electronics and merges it with human tissue to create monstrous creations bent on wiping humans, which it also considers a virus, off the face of the planet.

Director John Bruno, a long time visual effects specialist, creates an occasionally very intense and scary thriller. In a sense it is one of the best B-movies in recent memory – cheesy, but enjoyable and, for SF fans and action movie fans, a fun movie. The story drags a bit early on, and screenwriters Chuck Pfarrer (Hard Target) and Dennis Feldman (Species) include the standard horror movie bumps, knocks, and chills the first third of the movie before revving up the gore and violence.

The characters are standard for this kind of movie. It has the standard lead characters around which a movie revolves; we know something of their motivations and of how their pasts affect the story. We also get the stock cannon fodder, the guys with the guns and the testosterone that inevitably die. However, everyone plays up to his or her part, and no one is lax in the proceedings.

Ms. Curtis is the consummate professional who can be smart when she has to be; she can scream and play the backpedaling victim, but she can fight back in the end, although this movie does force her to be limp enough to allow for Baldwin’s manhood. Not great, but a good supporting player, Baldwin plays the blue-collar guy smart enough to survive. Sutherland, slumming as he so often does, is the consummate character actor; with a distinctive voice and the skills to play a variety of characters, he gives Captain Everton that touch of evil that would make his captaincy ripe for mutiny.

Virus is a nice one for home viewing, especially on a dark and stormy night. Obviously not a fine meal, it’s a darn good burger.