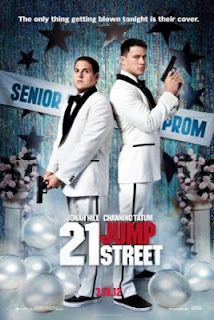 Right up front, I must say that I like Jonah Hill and Channing Tatum. I haven’t seen all the movies in which each actor has appeared, but I try to see as many as I can. I don’t plan on watching two of Tatum’s biggest hits, Dear John or The Vow, unless someone pays me. No one is going to pay me to see either movie.

21 Jump Street is a crime comedy starring Jonah Hill and Channing Tatum. The film is based on 21 Jump Street, the television series created by Patrick Hasburgh and Stephen J. Cannell and which aired from 1987 to 1991 on FOX and in first-run syndication (in the series’ final season). The movie follows two underachieving cops who go undercover at a high school in order to break up a drug ring.

Morton Schmidt (Jonah Hill) and Greg Jenko (Channing Tatum) were high school classmates, but Morton the geek and Greg the cool kid weren’t friends. They became friends after they entered the police academy, where they made up for each other’s weaknesses. After graduating from the academy, they are assigned to park patrol, where they screw up so badly, they’re almost kicked off the police force.

Their last chance is a recently revived police department specialty division, 21 Jump Street, which uses youthful looking police officers to infiltrate high schools. The division head, the profanity-spewing Captain Dickson (Ice Cube), sends Morton and Greg to Sagan High. There, they must find the dealers of a new synthetic drug, H.F.S., but their ultimate goal is to find out the identity of the suppliers behind the dealers. While trying to fit in and not look like narcs, Morton and Greg learn that much has changed since their own high school days a decade ago.

21 Jump Street turned out to be much funnier than I thought it would be, and I thought that it might be a guilty pleasure or, at least, mildly amusing. There is nothing guilty about this pleasure. First, I think that it is a sarcastic send up of action comedies, especially of the buddy-cop variety, and it’s quite good at that. It is smart and dead-on about generational shifts in culture, especially concerning attitudes on identity, sexuality, and technology. Mostly, the movie seems to be about friendships: how they develop, what keeps people together, what can cause strife, etc. The dynamic of friendship between two young men, one that seems to have the potential to last a long time, plays out between the film’s jokes about demanding bosses, eccentric teachers, socially-conscious students, and a group of geeks who really want the new guy to like them.

I think 21 Jump Street works so well as a cop comedy because the relationship between Morton and Greg, with all its odds and ends, seems genuine in the context of a fictional union created for a movie. This movie is worth watching because of Morton and Greg and the way that Hill and Tatum, respectively, portray them. I liked the two enough to be very happy when I learned that a sequel to this movie is in the works.

I don’t want to make 21 Jump Street sound like a “bromance.” There is some ridiculous and crazy shit that happens in this movie, and almost all of it is very funny. It’s never over the top, even in the way Rob Riggle’s character, Mr. Walters, tries to save a special body part near the end of the film.

Posted by Leroy Douresseaux at 10:19 AM