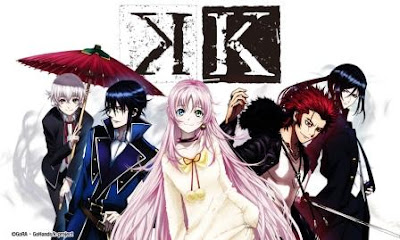 VIZ Media takes fans to an alternative world of – K - in the North American debut of the new anime series on VIZAnime.com, the company’s own website for free anime, as well as on the free, ad-supported Hulu service and the Hulu Plus subscription service (www.Hulu.com).

K will be presented in Japanese with English subtitles, and debuts in North America the same day it launches in Japan. Episode 1 is now available, and new installments of the 13-episode series will debut every Thursday.

K is set in a world where history has taken a slightly different course from the one we’re familiar with and follows the story of a young boy whose life is caught in a psychic war between seven kings. Yashiro Isana, also known as Shiro, is wanted for a crime he has no recollection of committing. He finds himself being hunted by the groups Homura, led by Mikoto Suoh, “The Red King,” and Scepter 4, led by Reisi Munakata, “The Blue King.” While on the run, another young man named Kuroh Yatogami helps him. Will this fated encounter change Shiro’s life forever?

“K is the newest anime property to be acquired by VIZ Media and we’re extremely excited to debut it on VIZAnime.com the same day as its launch in Japan,” says Brian Ige, Vice President, Animation. “K was developed by GoHands, the studio that created the cyberpunk anime film series, Mardock Scramble, and enigmatic writers’ collective GoRA Project. The highly detailed look of K’s production and its intriguing story will definitely give this new series a strong following. Don’t miss the exciting first episode!”

For more information on K and other animated titles from VIZ Media please visit www.VIZAnime.com.