"V for Vendetta" Surprisingly Both Safe and Edgy 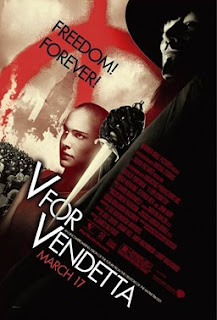 The subject of this movie review is V for Vendetta, a 2006 dystopian film and science fiction thriller directed by James McTeigue. The film is produced by the team behind The Matrix, producer Joel Silver and the brothers, Andy and Larry Wachowski, who also wrote this film’s screenplay. This movie is based on the comic book, V for Vendetta, which was written by Alan Moore and drawn by David Lloyd.

In a futuristic Britain ruled by a totalitarian government, represented by Chancellor Adam Sutler (John Hurt), a terrorist freedom fighter who calls himself “V” (Hugo Weaving) begins his campaign to wake up his fellow citizens to rise up against tyranny and throw off the yoke of oppression by blowing up a landmark building. As incomparably charismatic as he is ferociously skilled in the arts of combat and deception, V has secretly obtained a seemingly inexhaustible supply of explosives, hacked his way into the government’s information network (BTN – British Television Network), and built a well-supplied infrastructure that allows him to move and do as he pleases.

V also dresses in black combat gear wrapped in a flowing dark cloak. Best of all, he wears a sweetly creepy Guy Fawkes mask. V encounters Evey (Natalie Portman), a young woman whose parents were killed by the government, and though she at first resists, Evey becomes an unlikely ally in V’s final plot to bring down a cruel, corrupt, and ultimately evil government.

[Guy Fawkes was part of “The Gunpowder Plot,” a Catholic plan to overthrow the English Parliament in 1605. Fawkes was hanged for planting explosives in the Parliament buildings. London revelers celebrate “Guy Fawkes Day” on November 5th and wear stylized masks of Fawke’s mustachioed and bearded face.]

V for Vendetta is the latest comic book to get a big screen adaptation. In the original comic book series (eventually collected in book form – a graphic novel – by DC Comics), which was written by Alan Moore and drawn by David Lloyd, V represented anarchy and the British government was fascist. Written in the 1980’s, the government of V for Vendetta was a stand-in for the government of former Prime Minister Margaret Thatcher. In the film, the British government is more totalitarian, but retains a dash of fascism. However, the movie version of the character V is more about democracy and government by the people – a government that answers directly to the ordinary, everyday person – and uses terror and bombings to destabilize the deceitful government. By showing the government for what it is – evil and corrupt – V hopes to make the people rise up. The V of the comic book wanted to put an end to all governments in favor of anarchy, which is a political theory that believes the highest attainment of humanity is not to be free, unhindered by any kind of outside repression or control.

This film adaptation of V for Vendetta is written and co-produced by The Wachowski Brothers (Andy and Larry), creators of The Matrix. They maintained the comic book’s London setting, but instead of British government is just a stand-in for the administration of President George W. Bush. The viewer doesn’t need to be politically astute to catch the allusions. In fact, of the film’s sub-plot turns on a horrific terrorist attack that happens in the movie’s history (or back story). The terrorists use a biological weapon that causes the death of 100,000 people – this is clearly a nod at 9/11. In fact, The Wachowskis’ script goes so far to suggest that the terrorists who launched the attack were actually high government officials who used the fear and aftermath of the attack to take control of the country. Conspiracy theorists also believe that 9/11 was orchestrated by the Bush Administration to launch foreign wars in Afghanistan and Iraq, as well as use fear of terror to strengthen its power at home.

Alan Moore, who has seen two of his other comic books/graphic novels – The League of Extraordinary Gentlemen and From Hell, turned into films that were not faithful to his comics, was livid about the changes the Wachowskis made to his work and demanded that his name be removed from the project.

The movie itself is very much like a comic book, but that isn’t meant in the pejorative sense. V for Vendetta the movie is full of the kind wild and crazy ideas that comics from the 1940’s and 60’s were so good at introducing. This is all played at with a pop culture sensitivity. Directed by John McTeigue (the “first assistant director” on all three Matrix films and Star Wars: Episode II – Attack of the Clones, among others), V is impressionistic and is meant to hit the audience’s heart by playing with its emotions; that is done by showing the government and its agents committing senseless acts of barbaric cruelty, not only against loyal citizens, but against anyone who is different of thinks differently (freethinkers, homosexuals, protesters, etc.). V speaks of ideas and words, and that’s how the film appeals to the intellect. It’s always giving the viewer something to think about between the cool looking scenes of fighting and of storm troopers, shock troops, and police knocking down doors and knocking heads. It can make you wonder about how much the government lies and tries to manipulate. For added fun, there is even a Bill O’Reilly-like big mouth hollering about faith and unity.

The key to enjoying V for Vendetta is V himself. The other characters are alright, but it’s clear that neither the Wachowskis nor the director love them as much as they love V. In fact, Natalie Portman may be a really fine actress – even a great stage actress, as some say – but her Evey pales next to V, even though she does some good work here and has some scenes that allow her to press her serious actress button real hard.

Played by Hugo Weaving (the evil agent, Mr. Smith, in The Matrix films), V is like Batman in a music video version of George Orwell’s novel, 1984. Although we hear Weaving’s voice, he is always in costume and we never see his face (or body, for that matter). Moving gracefully, sometimes subtle, and sometimes with stylized exaggeration, Weaving shows us how truly cool it looks to wear a costume with a cape and a mask and be the mystery man in the shadows fighting tyranny and oppression. Weaving’s voice and movements turn the Guy Fawkes mask that V wears into an enchanted jester’s face that mocks fear, apathy, and weakness. Weaving’s V makes you want to stand up, be strong, and cast off the chains of oppression and the net of ignorance. Underneath that mask and beneath that costume is a spirit, an essence of a free mind and a free ass.

And though, the V for Vendetta film is sometimes shaky with a narrative that goes all over the place, and though it is a movie with more ideas than it can handle, this movie is bold and audacious. It is a dangerous comic book brought to life as a series of bold and explosive “View Master” reels. It is as sly as it is clumsy, and it is as daring in its ideas as it is confused. V for Vendetta plays it safe, but only a little, while criticizing (our) government, but it gets in enough digs to make us think.

Posted by Leroy Douresseaux at 10:08 AM