"The Mummy Returns" with the Same Old Fun 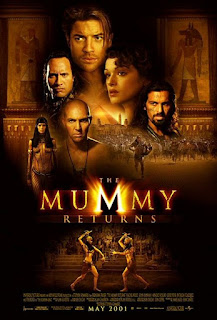 
The subject of this movie reviews is The Mummy Returns, a 2001 adventure and fantasy film from director Stephen Sommers. It is a direct sequel to the 1999 film, The Mummy.

It is 1933, ten years after the events of the 1999 film, The Mummy. The British Museum Curator (Alun Armstrong) has shipped the mummified body of the first film’s villain, Lord Imhotep (Arnold Vosloo), to England. He and his partner, Meela Nais, a girl who is the reincarnated body of Imhotep’s ancient love, Anck-su-namun (Patricia Velazquez) have plans to resurrect the Mummy to conquer the world. They’ve set their sights on the army of Anubis; combined with Imhotep’s power and Anubis’s forces, they can rule the world. However, the army belongs to the Scorpion King (Dwayne “The Rock” Johnson), who Imhotep must defeat to control Anubis monstrous legions.

Standing in the way of the Mummy, his conspirators, and the Scorpion King, is the gang from the first movie. American adventurer Richard “Rick” O’Connell (Brendan Fraser) is married to Evelyn “Evie” Carnahan-O’Connell (Rachel Weisz). The have a 9 year old son Alexander “Alex” O’Connell (Freddie Boath), and Evie’s brother John Carnahan (John Hannah) is still around and up to no good. When the villains attack the O’Connell’s palatial London estate and Ardeth Bay (Oded Fehr) arrives in time for the home invasion, the gang is all set to return to the sands of Egypt to save the world from the forces of darkness. And there is some weird reincarnation and avatar plot elements to boot added to the mixture.

Directed by Stephen Sommers, the director and co-writer of the first film, The Mummy Returns is more of a fantasy/adventure with elements of horror than its predecessor, which was equal parts horror, fantasy, and adventure. The first winked and nodded at Raiders of the Lost Ark, but Returns is Raiders-lite, much more sugar coated than Raiders or The Mummy.

The effects are not so much dazzling as they are neat. In the first film, Imhotep raised a gigantic wall of sand with his visage on the face of the sand wall; in this film, he does the same trick with a wall of water. Both are impressive, but the second one seems more paint by number, simply because it’s done to repeat the sand trick of the first film. It’s one of many SFX shots meant to up the ante of the first movie. In the jaded world of popcorn cinema, the audience has seen so much that the makers of bam-socko movies have to always top what’s come before.

The acting is over the top, but quite functional; they know what they’re supposed to do and no actor lets his artistic ego get in the way of making thoughtless fun. And this movie is indeed fun, if not a little too long. The Mummy Returns careens madly across the screen like a ball in a pinball machine. Whereas the first was more coherent and a little scarier, this one is a thrill ride designed to have the feel of video game or a cat and mouse chase.

Sommers does his job quite well; like his cast, he doesn’t intrude artistically on the need for mindless entertainment. His gift is his ability to steer this bucking bronco of a movie. I don’t know if he can use the camera with any panache or creative skill, but he can make an above average, sit-back-and-be-entertained film that is neither too dumb nor too smart, to leave a bad aftertaste in the mouth, or any after taste for that matter – a good home video rental.