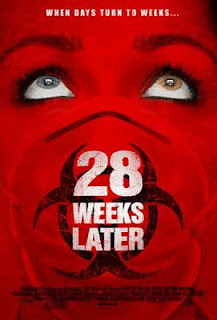 28 Weeks Later is a 2007 British horror film and sequel to the 2002 film, 28 Days Later… (released in the U.S. in 2003). Danny Boyle and Alex Garland, the director and writer of the original film, respectively, are this movie’s two executive producers.

While watching the British post-apocalyptic horror flick, 28 Weeks Later, one can’t help but understand that this brilliantly imagined film is speaking directly to its audience, here and now. The messages are writ large across the screen – everything from the foolishness of military occupations as a stopgap against the inevitable to the horrors that the careless manipulation of the environment can bring. It’s as if director Juan Carlos Fresnadillo and his screenwriters made a gumbo out of the mental horrors of Edgar Allen Poe, George Romero, and George W. Bush.

28 Weeks Later opens six months after the events depicted in the first movie. American military forces have secured District One, an isolated section of London, where the survivors of the rage virus outbreak can repopulate and start again. Not everything goes as planned. The rage virus continues to live and is waiting to be spread again and finds its carrier in an English nuclear family.

What I like about 28 Weeks Later is that Juan Carlos Fresnadillo is unapologetic in composing a brutally gory horror flick. 28 Days Later… started off as a right vicious cheesy horror flick; then, it bogged own in a morality play/test of wills between a mad military type and desperate peaceniks. Both sides were wrong, and their little message theatre cooled off the infection-fed fever that was 28 Days Later… the first half. 28 Days Later… might make you think the horror genre and message movie couldn’t really go together.

Silly rabbit, great horror speaks to our deepest fears and anxieties – past, present, and future. Like George Romero, whose Night of the Living Dead and The Crazies influenced 28 Days Later…, Fresnadillo understands that a horror movie can essentially be a message movie without every trying to be obviously socio-political. The filmmakers can do this by creating scenes in which characters argue and debate their circumstances both in an intimate and in a larger context).

28 Weeks Later is swift, vicious, and smart. The script is grimly imaginative in creating deadly peril for its cast, and never letting the audience off the hook. Both biting and timely, the film says that the “rage” infection ain’t going away (which means a seemingly endless supply of infected/zombies) because the very structure of our society – a collective that can be both parasitic and symbiotic – is the perfect moist nesting ground for the disease.

Six months after the rage virus annihilated the British Isles, the U.S. Army declares that they have won and that rebuilding can begin. The blindness of the American forces to the reality of their environment mirrors current realities. Maybe, some of these fictional military types believe that being part of a hyper-power: with all its fire power, know-how, and cutting-edge technology, means that they can shape reality, but death on two, swift, rage-infected legs says otherwise.