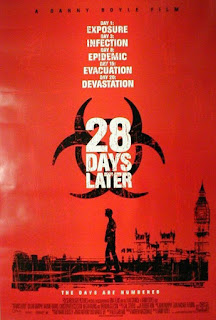 What if the Danny Boyle, the director of the sublime Trainspotting and The Beach (hey, I really like that movie), decided to make a zombie movie? If you’re like me, you were excited the first time you heard about this project. Well, we got it…sort of. Released in the United Kingdom in 2002, 28 Days Later was a big hit, but we had to wait until the summer of 2003 before Americans saw it. It’s not quite the zombie gore fest that I expected, but it’s a very creepy post-apocalyptic drama.

A group of do-gooder animal rights activists (the road to Hell…) break into an animal research facility with a lab full of monkeys that are, a captured scientist tells them, “infected with rage.” An infected monkey attacks one of the activists and unleashes an epidemic that destroys the U.K. Whenever a human is exposed to even one drop of blood or saliva from the infected, he becomes locked into a permanent state of murderous rage. In 28 days, Great Britain is a dead civilization.

On the 28th day, bike courier Jim (Cillian Murphy) wakes from a coma he suffered after a car hit him and finds himself in a completely empty hospital. Not long after that he runs into group of infected humans, now murderous “zombies.” These “rage” creatures aren’t like the traditional foot-shuffling zombies we’ve come to love, especially in George A. Romero’s Night of the Living Dead and its sequels. They’ll chase a healthy human down with the speed of a track star and the single-minded zeal of a crackhead. Jim meets a handful of survivors including tough girl Selena (Naomi Harris) and father-daughter team Frank (Brendan Gleeson) and Hannah (Megan Burns). Jim and a few of the survivors eventually end up at a military compound where they discover that their most desperate struggle for survival might not be against the ghouls.

28 Days Later taps into two of post-9/11 biggest worries, the threat of terrorism and lethal contagion. Arriving in America on the heels of the SARS scare, the film has dreary and sort of dreadful sense of realism. I found the “rage” disease and the speedy, raspy, blood-vomited monsters a bit farfetched (but still scary), so the entire horror genre angle of the film was mildly retarded; it simply just didn’t have the blow-to-the-gut immediacy and terror of something like Day of the Dead. The scariest thing about this film is the idea of how much harm humanity can do itself. The most potent violence in this film is simple man vs. man bloodletting, be it from sudden bloodlust or from cold, calculated murder.

If the characters appear thin, it’s because of the weight of their troubles. The audience is more focused on the both the film’s setting and concept than the characters. Besides, in a horror movie, characters of depth are largely a waste since the sole reason of characters in horror movies is to be acted upon violently. Still, I like what I saw. Brendan Gleeson always brings a strong dramatic presence to any film in which he appears. He’s the solid, archetypical father figure struggling to save his charges from the chaos of a mad world. I like Cillian Murphy’s gangly Jim, but it’s a bit hard to buy him as a hero. However, he works as a believable everyman who shows up out of the blue; at least one of that kind survives every the apocalypse in a post-apocalypse film. I really dug Naomi Harris’s Selena; she’s a warrior and the best genre heroine since The Matrix’s Trinity.

It would have been simpler just to make a cool-looking MTV-style zombie movie, but Boyle and screenwriter Alex Garland went and got all-artful on us. In the film, the threat of a sudden and bloody-vicious zombie attack is a quite palatable fear that you can feel in your soul, but genre considerations apparently had to give way to a bit of social commentary. The film speaks with a lot of hopelessness concerning the state of human affairs with just enough of hopeful resolution to make it a Hollywood ending. I have mixed feelings about this film, mostly because I didn’t get what I wanted.

Still, I can’t get the ominous and grainy images of 28 Days Later out of my head. Boyle shot the film on digital video reportedly for budgetary reasons; if this is true (others say the choice was artistic), it is a happy accident for sure. The “docu-realism” look of the film will make it a memorable movie about the end of the world, as we know it.

Posted by Leroy Douresseaux at 11:51 AM