"The Howling" Still Has Bite 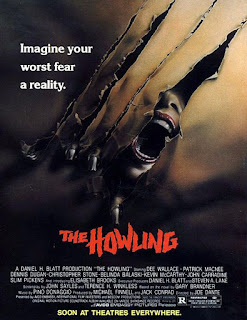 The subject of this movie review is The Howling, a 1981 werewolf movie from director Joe Dante. The film is loosely based on Gary Brandner’s 1977 novel of the same name. The film starred real-life husband and wife Dee Wallace and Christopher Stone, who were married from 1980 to Christopher Stone’s death in 1995.

One of the few great werewolf movies of the last quarter of the 20th Century is The Hollowing. Directed by Joe Dante, the film is part tongue-in-cheek and part tribute to B-movie horror, but to describe the film as merely cheeky or cheesy would be a disservice to a film that features some really great scary movie atmosphere and some fantastic monster makeup effects.

After a traumatic experience with a serial killer, TV news reporter, Karen White (Dee Wallace) and her husband, Bill Neill (Christopher Stone), move temporarily to a rustic California resort called The Colony, at the behest of the resort’s founder, Dr. George Waggner, who is Karen’s therapist. Once at the colony, both Karen and Bill dislike the kooky yokels. However, Bill starts to blend in after a comely and brazen young woman puts some moves on him. Karen is upset by this attention Bill is getting, but she is more worried by what she hears at night, right outside her window – the howling. Meanwhile, Karen’s colleagues, Terry Fisher (Belinda Balaski) and Christopher (Dennis Dugan), are getting closer to making a shocking connection between the serial killer who attacked Karen and The Colony.

The Howling for all its humorous edge is also quite intense. In fact, Dante directs the shrewdly and tightly (co-written script by John Sayles) in a straight fashion and with a straight face. Considering the subject matter, the viewer may take The Howling as a howler or as a riveting horror flick. It works quite well either way, plus, the film’s sexual edge is quite effective. The women in this film are by far the most interesting players. Dee Wallace and Belinda Balaski’s primary mode is either breathless wonder or wild-eye terror, and they do it so well.

The Howling’s best aspect is the monster costumes and special makeup effects; the werewolf transformation scenes are fascinating and mesmeric, each one a unique, mind-bending, imaginative showcase of the immense talents of Rob Bottin. Unfortunately for Bottin, his work was overshadowed by his mentor, Rick Baker, who won an Oscar for his make up work in 1981’s other werewolf movie, An American Werewolf in London. Bottin’s work, Dante’s directing, and the Sayles/Winkless script make this a must-see for horror movie fans.