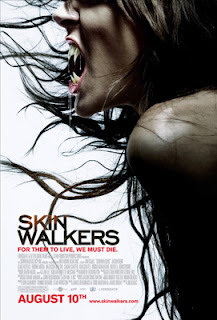 FANTASY/THRILLER with elements of horror

The subject of this movie review is Skinwalkers, a 2006 werewolf movie and horror-action film directed by James Isaac (Jason X). It was released to theatres in the United States in 2007.

In Skinwalkers, a pre-teen boy learns that he is the balance of power and object of desire in an old war between two factions of werewolves.

As he prepares to turn 13, 12-year-old Timothy (Matthew Knight) finds his health crashing around him, as he’s beset by asthma attacks and fainting spells. Timothy is also blissfully unaware that he is the tipping point in a long war between two groups of werewolves, which are also known as skinwalkers. One faction wants to be free of the curse of the werewolf; the other side joyously feeds on human flesh and thirsts for human blood. Timothy doesn’t know that he is a half-breed; his mother, Rachel (Rhona Mitra), is human and his deceased father is a werewolf. Timothy doesn’t even know that the extended family with which he grew up, including his Uncle Jonas (Elias Koteas), is a band of good-hearted werewolves that has been protecting him since the day he was born.

Timothy is the child foretold by an Indian prophesy. The arrival of Timothy’s 13th birthday during the last night of the “blood red moon,” will somehow forever end the curse of the werewolves. Skinwalkers will become wholly human. However, the werewolves who don’t see their condition as a curse and embrace the bloodlust have been lurking in the shadows. Led by Varek (Jason Behr), an evil pack of werewolves has been waiting for more than a decade to kill Timothy before he turns 13, and now they’re making their move. Jonas, Rachel, and a select group of fellow believers go on the run hoping to keep Tim just out of reach of the other werewolves until his birthday, but the relentless Varek practically has Timothy his bloody grasp.

What was supposed to be a 1 hour and 50 minute, R-rated movie was cut down to a 91 minute, PG-13 rated movie (although this movie still has enough blood, gore, violence, and simulated sex to have maintained it’s R-rating). Still, even with the obvious holes in the plot and story that come from removing 19 minutes of narrative, Skinwalkers is a very entertaining monster flick. It’s more fantasy and suspense thriller than horror, and though it doesn’t have the bite of such werewolf flicks as An American Werewolf in London or The Howling, Skinwalkers often packs a wallop. Its intricate back story and open-ended final scene leave room for sequels, but what it offers now is entertaining enough to make one pine for an “extended edition” DVD.