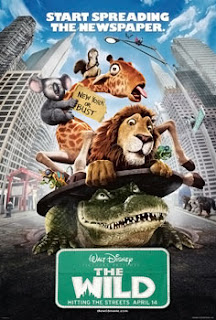 The subject of this movie review is The Wild, a 2006 computer-animated film. It was distributed by Walt Disney Pictures and was produced by the now-defunct, Canadian computer animation company, C.O.R.E. Feature Animation (a part of C.O.R.E. Digital Pictures). The film is of note for its similarities to DreamWorks Animation’s Madagascar (2005).

When his son, Ryan (Greg Cipes), an sullen pre-teen lion cub, is mistakenly shipped out of the country, Samson (Kiefer Sutherland), the star lion at the New York Zoo, chases the ship across the ocean with his friends: Benny (Jim Belushi), a savvy and streetwise squirrel; Bridget (Janeane Garofalo), an independent-minded giraffe; Larry (Richard Kind), a dim-witted anaconda; and Nigel (Eddie Izzard), a smart aleck koala in toe. They eventually trek the ship to an island with a highly active volcano. Here, Samson and his friends are confronted by something new to them – a dark foreboding jungle – the wild.

Disney apparently had been preparing for the day that their relationship with Pixar Animation Studios, the makers of such computer animated smash hits as the Toy Story franchise, Finding Nemo, and The Incredibles, among others, might end. However, Disney and Pixar announced their merger a few months ago (as of this writing), but before the happy nuptials, Disney had produced two computer animated feature films independently of their esteemed partners at Pixar. The first, Chicken Little, debuted early last fall. Mid-April 2005 sees the arrival of the second film, The Wild.

The Wild has some high quality computer animation, not Pixar quality, but as good films such as Blue Sky Animation’s (Fox) Ice Age and PDI’s (DreamWorks) Shark Tale. The opening scenes – a fantasy/dream sequence – are electric and alive. The texture and fur on the animals, especially on Samson, Benny, and Nigel is superb. When the narrative reaches “the wild,” the movie comes alive in a world of diverse, vibrant, and rich colors. The characters move with fluidity and grace, and the action sequences are as good as Pixar’s work up to Monster’s Inc.

On the other hand, the script is dust bowl dry and sandpaper scratchy, from the beginning until the heroes reach “the wild.” By then, it would almost be too late to save the movie, except the film’s action and the array of creatures during the last third of the story reach a fever pitch. Most non-Pixar computer animated features generally fail in the story department, and this one barely gets an average grade. In fact, The Wild is embarrassingly (for Disney) similar to DreamWorks late spring 2005 hit, Madagascar. Both films have a lion in an identity crisis as the lead character. Both films also have New York Zoo creatures suddenly tossed back into their jungle (or “wild”) habitats after a forced Atlantic Ocean voyage.

As nice as the film looks, the voice acting is not so nice a listening experience. Kiefer Sutherland’s distinctive voice is lost in a poor character. In fact, Samson is often just the straight guy to Jim Belushi’s Benny, a good character well played by Belushi. Eddie Izzard’s unique vocal style, which works best when he’s on stage doing standup comedy, is neutered as the voice behind a cartoon character. Izzard’s performance here is a good example of why it is not always a good idea to get well-known screen and TV actors to do voice over work for animation. Sometimes a big movie star’s voice and acting style just doesn’t work without the face, so the studios would do better hiring actors who specialize in doing voiceover work for animation.

Overall, The Wild is a B-movie computer animated feature because of story and character, but its technical quality is noteworthy. I’d like to see director Steve “Spaz” Williams and his crew give it another shot, but like the makers of Chicken Little, there may be no place for them at the new Disney, now that Pixar will be calling the cartoon shots for the famed movie studio long into the foreseeable future.

Posted by Leroy Douresseaux at 12:41 PM