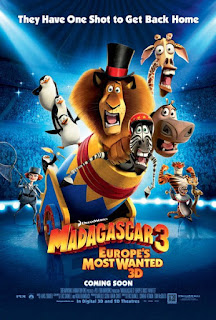 Madagascar 3: Europe’s Most Wanted finds Alex, Marty, Gloria and Melman headed to Monaco, Monte Carlo in search of the penguins and their two chimpanzee companions, Mason and Phil. What they find is trouble in the form of Captain Chantal DuBois (Frances McDormand) of Monaco Animal Control. On the run from DuBois and her cohorts, Alex and company find a safe haven with Zaragoza Circus. The circus, which has seen better days, needs some help, but its animal denizens are suspicious of the newcomers. Alex sets out to reinvent the circus, a miracle that just may get him and his friends home – finally!

Madagascar 3: Europe’s Most Wanted is the best film in the Madagascar franchise. I’d planned on seeing it in a theatre, but I wasn’t really that enthused about it. I rented Madagascar 3 on DVD, and gave the copy to my mother. After watching it, she wanted to know if she could keep the disc to watch it a second time. She rarely watches films a second time, so I knew something was up. After watching the first few minutes of the film, I knew that it was going to be good. By the time the action explodes in the Hotel De Paris sequence, I knew that this movie was going to be something special, and it is. Madagascar 3: Europe’s Most Wanted is the best film DreamWorks Animation has produced to date – even better than the exceptional Kung Fu Panda movies. What’s the difference between Madagascar 3: Europe’s Most Wanted and the earlier Madagascar films and most other DreamWorks’ cartoons? The difference is the writing/storytelling.

I’ve come across commentary that describes DreamWorks as the tech guys of computer animation and Pixar Animation Studios as the art of storytelling guys. There is some truth to that. DreamWorks is producing computer-animated films in which the quality of the animation in terms of movement of characters and objects is improving by sky-high leaps and bounds. The stories in Pixar’s films have heart and the characters almost seem like real people, as seen in the Toy Story films, Wall-E, and Up. These films captivate adults as much as they capture the imagination of children.

Europe’s Most Wanted has heart. The earlier Madagascar films relied on the personality quirks and the motivation and conflicts of the characters, but the plots and action weren’t as interesting or as funny as the characters. In fact, whenever the characters fell flat in the first two films, the plots could not rise to the level where the characters had been. The first film was interesting, and the second was not quite as good, but had its moments.

Europe’s Most Wanted has one great moment after another; the narrative is entrancing, and the action is exhilarating. This allows the characters, main and supporting, to shine, as excellent performers usually do when they have top-notch material. Of course, the animation is great, some of the best ever; it’s DreamWorks Animation, after all.

This movie also adds three fine new characters: Gia the Italian jaguar (Jessica Chastain), Vitaly the Russian tiger (Bryan Cranston), and Stefano the Italian sea lion (Martin Short). All three of the actors playing these characters give superb voice-acting performances. They help make Madagascar 3: Europe’s Most Wanted better than the earlier films – a lavish spectacle of animation brilliance. This story about the meaning of home and friendship is one of the great animated films in recent memory. I want to watch it again.

Posted by Leroy Douresseaux at 2:03 PM