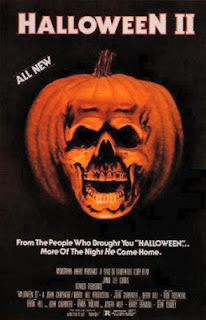 Loomis shot Myers six times at the end of the first film, but Myers walked away from what should have been kill shots. After that recap (with some new footage mixed in), Laurie is hauled off to the local hospital, but Myers tracks her across town and enters the hospital, where he begins to kill off the hospital staff so that no one can be in his way when he moves in to kill Laurie. Meanwhile, Dr. Loomis is running into his own problems, as Michael’s murder spree from the first film has the entire state in an uproar, with the blame placed squarely on Loomis’ shoulders. Dr. Loomis also learns a hidden secret, which reveals that Laurie was Michael’s main target all along. Can he get to the hospital in time?

Although the screen credits for Halloween II list John Carpenter, who directed the first film, as strictly a co-writer and co-producer for the second film, Carpenter thought Halloween II director, Rick Rosenthal, had delivered a sequel that was too tame. Carpenter did three days of re-shoots for Halloween II and added the new scenes into the footage Rosenthal shot in order to make the final version of the sequel bloodier, and Halloween II certainly is. The body counts exceeds 10 (whereas there were only four onscreen killings in the first film), and the sequel certainly reflects the gory nature of 1980’s slasher films like the Friday the 13th franchise, although the original Halloween, which almost single-handed gave birth to the 80’s slasher craze, does not have an abnormally high body count.

Despite the bodies piling up, Halloween II has a superbly chilling atmosphere that will have goose flesh raised and the viewer cowering in his seat. The hospital, operating on a nighttime skeleton crew, is all dark rooms and shadowy corridors, which is perfect for the spooky sequences of Myers slowing stalking the hallways, his slow footsteps bringing him from one scene of bloody mayhem to the next. Rosenthal, who would later direct the 2002 installment of this franchise, Halloween: Resurrection, should probably get credit for creating this frightful ambiance. Jamie Lee Curtis and Donald Pleasance give good performances, in particularly Pleasance, who gives Dr. Loomis a droll sense of humor and a matter of fact attitude about his quest to stop Myers. However, this flick’s true stars are the darkened exteriors and interiors and the murderous wraith that stalks them. Halloween II may be inferior to the original film, but it’s not inferior by a whole lot.