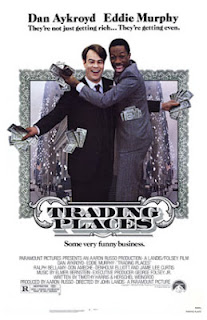 The subject of this movie review is Trading Places, a 1983 comedy film and satire from director John Landis. The film stars Dan Aykroyd and Eddie Murphy as a snobbish commodities trader and a streetwise con artist, respectively, who plot revenge against two conniving millionaires who cruelly use them in a personal wager.

Rare is the comedy film that enjoys success across a broad spectrum of viewer types and still remain popular even two decades after its initial release. That is exactly the case with director John Landis’s buddy, comic caper Trading Places.

Mortimer (Don Ameche) and Randolph Duke (Ralph Bellamy), millionaire commodity brokers, have made a bet. Randolph believes that he can take a common criminal off the streets, Billy Ray Valentine (Eddie Murphy), and make him into a successful businessman, the old nature vs. environment/nurture. Mortimer disagrees, siding with nature, and the brothers bet one dollar to whoever wins. To learn if even a man who has been brought up in the right environment and has gotten everything he wants can go bad, they pick their hand-chosen successor at Duke and Duke, the snobbish Louis Winthorp III (Dan Aykroyd), and frame him for a few crimes. He loses his job and winds up in jail. The Dukes give Billy Ray Louis’s home and job at Duke and Duke. When Billy Ray accidentally discovers the wager, the wily young con artist joins Louis, Ophelia (Jamie Lee Curtis) a hooker with a heart of gold who has befriended Louis, and Louis’s butler Coleman (Denholm Elliot) to turn the tables on the two callous Duke Brothers.

One of the things that makes this film so much fun is that it plays upon broad socio-economic stereotypes that are very familiar to audiences. What makes these almost stock characters work so well is a combination of excellent comic actors and a good comedic script. Dan Akyroyd is a very good actor, but he is mostly known as a comedian; combine good acting with a great sense of comic timing, and you have a great performance.

Eddie Murphy’s star as a movie actor was rapidly rising at this point in his career, but he was already a quite accomplished player in the cast of “Saturday Night Live.” The Murphy here is still the brash, streetwise, fast talker bursting with the kinda of “black comedy” that both black and white audiences love – you know, the sassy and mouthy Negro who always has a come back or something smart-alecky to say. That Murphy is mostly gone and rarely makes a film appearance now almost 20 years into Murphy’s film career, but looking back, one can see that he makes Billy Ray Valentine both hilarious and loveable – the guy you can root for and with whom you can almost identify.

Kudos also go to longtime screen veterans Bellamy, Ameche, and Elliot for bravura performances that take stock characters and give them flavor and delightful personalities. We also get the added gem of seeing Ms. Curtis in a role that didn’t require her to run from a knife-wielding murder. Up to this point in her career, Ms. Curtis had become the new "Scream Queen" of horror films.

If you haven’t seen this film, you don’t know what you’re missing. If you’ve seen it once before, you should be at least on your tenth viewing.