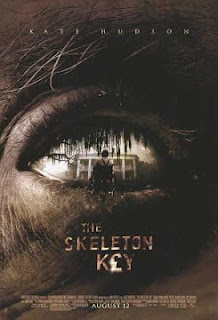 Set in the backwoods of Houma, Louisiana (in the same region as New Orleans) in Terreborne Parish (what La. calls its counties), The Skeleton Key is the story of Caroline Ellis (Kate Hudson), a young hospice nurse hired to take care of an elderly woman named Violet Devereaux’s (Gena Rowlands) ailing husband, Ben (John Hurt). Ben supposedly had a stroke while poking through the attic of the Devereaux’s home, a foreboding and decrepit old plantation-style mansion in the Louisiana delta. Ben can’t speak because of the stroke, and Violet is certainly… eccentric. However, the enigmatic couple and their dark and rambling home intrigue her, so Caroline, armed with a skeleton key that unlocks every door in the house, Caroline begins to explore the home and discovers that the large attic actually hides a secret room.

The hidden room holds some darkly mysterious and terrifying secrets; according to Violet it was once the secret room of Papa Justify (Ronald McCall) and his wife, Mama Cecile (Jeryl Prescott Sales). Violet also tells Caroline that the couple practiced hoodoo, a mixture of African, European, and Native American conjuring or black magic (not related to voodoo), and that the couple was lynched and burned because they allegedly tried to teach their witchcraft to their white boss’ son and daughter. The written spells, potions, powders, etc. that they used in their dark arts remain in the secret room. Caroline believes that the method to curing Ben lies in that secret room, and that she must use psychology to convince Ben that the hoodoo only affects him because he believes in it. If she can prove to him that it’s all nonsense, he should be cured… or so Caroline believes as she slowly entangles herself in a dark trap that she’s apparently too stupid to recognize.

Universal Pictures’ advertising tried to sell The Skeleton Key as being a horror movie in the tradition of such late 60’s/late 70’s suspense thriller-type horror movies as Rosemary’s Baby and The Exorcist, or modern atmospheric suspense flicks such as The Sixth Sense and Stir of Echoes. Director Iain Softley (K-PAX) certainly makes use of the charmingly gothic and dread-inducing New Orleans area locations, and his cinematographer Daniel Mindel (Spy Game) and his crew add the final touches that make the film look both moody and morbid. Art directors Drew Boughton and Suttirat Anne Larlarb and set decorator Fontaine Beauchamp Hebb team up, however, to be The Skeleton Key’s true stars. The Devereaux’s creepy old mansion, the surrounding swamps, and dilapidated dwellings are like the drawings of Graham “Ghastly” Ingels, beloved creator of some of the best art ever to appear in legendary EC horror comic books. Ultimately, any legitimacy that The Skeleton Key has as a good horror movie rests in their creative vision; the film is as much theirs as it is Iain Softley’s.

The Skeleton Key, for all that it is sinister, is the kind of film that the less you think about it the more sense it makes. Dig deeply enough into Ehren Kruger’s (The Ring and The Ring Two) script and the film falls apart because its internal logic is full of holes that Kruger either didn’t notice or chose to ignore – likely that latter. Horror movies aren’t supposed to make sense (which is the belief of many fans and quite of few of its practitioners); the scary movie’s success lies in scaring people, and The Skeleton Key is certainly a delightfully spine-chilling affair… as long as you don’t take a hard look at it.

Sure, it seems as if Kate Hudson is slumming for a paycheck; sometimes she doesn’t even bother to act. She stands or sits there with a stony, blank expression on her face, as if she’s wondering in which script hides another potential Oscar nod while a movie is being made around her. Luckily, the superb Gena Rowlands is there to tear it up; her Violet Devereaux is a combination of pointed wickedness, proud dishonesty, and dismissive sarcasm. Rarely has matronly evil looked so good; she’s Joan Collins/Dynasty mean. John Hurt is also great, taking his crippled Ben Devereaux and turning him into a totem of fear-drowned and cuckolded manhood.

While Ms. Hudson struggles to bat .300 in this film and although the villains are as comical and they are scary, The Skeleton Key is a solid, suspense filled horror hit. For all the holes in the concept, screenwriter Ehren Kruger is probably the best writer of scary movies this new century. Cast and crew have glossed over their missteps with enough hair-raising and spine-chilling tropes to make The Skeleton Key a must-go trip to the theatre, at least for true fans of the scary. Sit back, let the feelings and emotions take control, and submit to the will of a big screen full of eerie.

Posted by Leroy Douresseaux at 9:01 AM