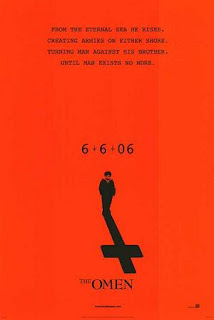 The subject of this movie review is The Omen, a 2006 horror thriller. This film, which is also known as The Omen: 666, is a remake of the 1976 horror film, The Omen. This remake is written by David Seltzer who also wrote the screenplay for the 1976 film.

Venerated movie critic Roger Ebert (the only writer to win a Pulitzer Prize for writing film criticism) says that the new movie, The Omen, a remake of the 1976 film of the same name, is faithful to that original. It’s been well over 25 years since I’ve seen the 1976 flick, so I can’t say with certainty. However, David Seltzer, who wrote the first film, has also written the remake, and I remember enough to say that at least this new flick creeped me out just as the original did.

Robert Thorn (Liev Schreiber) is a young American diplomat in Rome, awaiting the birth of his first child by his wife, Katherine (Julia Stiles). He arrives at the hospital, where the presiding priest, one Father Spiletto (Giovanni Lombardo), informs Robert that Katherine had an extremely difficult delivery, during which their infant son died. The priest also tells him that Katherine doesn’t know that their child died. He reports to Robert that another woman delivered the same time Katherine went into labor, and while that mother died during delivery, her son survived. Father Spiletto implores Robert to take this other infant as his own son, but not tell Katherine that this isn’t her infant. God won’t mind this little deception, the priest tells Robert.

Five years later, the Thorns’ son, the mystery infant they named Damien (Seamus Davey-Fitzpatrick), is a brooding, peculiar child who seems to be, from the point of view of his mother, the nexus of strange events. Katherine feels detached from the child, and she insists that Robert hire a nanny to help her with the boy. Into their lives arrives Mrs. Blaylock (Mia Farrow), who seems as strange as Damien. They mostly ignore the weirdness in their lives, especially Robert, but when Father Brennan (Pete Postlethwaite), a frantic priest with a haunted air and haunted look about him, continually gives Robert dire warnings about Damien, the newly minted U.S. Ambassador starts to have his own misgivings. With the help of a photographer, Keith Jennings (David Thewlis), Robert is about to discover his son’s true origins and a secret so dire that the fate of mankind may hang in the balance.

The Omen is an adult psychological thriller, a supernatural suspense story in the tradition of Rosemary’s Baby, The Exorcist, and of course the 1976 version of The Omen. Recent films of that type include such box office stumbles as End of Days, Lost Souls, and The Ninth Gate. Director John Moore takes the few changes the new movie makes to the original flick and uses them to create a creepy film with a narrative haunted by the proverbial ominous future. Known for directing commercials before helming such films as Behind Enemy Lines (2001) and Flight of the Phoenix (2004), Moore blends composer Marco Beltrami’s eerie score with his own visual gumbo of ghostly locales and engaging, but troubled characters. Moore and his crew turn their filming locations in Italy, Ireland, Croatia, and the Czech Republic into places where the supernatural is quite natural: an isolated monastery reachable only by traveling across a midst covered lake; an ancient underground Hebrew village; the forlorn mansion in which the Thorns live, and a weird Etruscan graveyard, etc.

Moore also gets superb performances from his cast, each one giving his character that something extra that makes him or her much more appealing than the standard horror movie victim. Schreiber adds of touch of Laurence Olivier circa Rebecca to Robert Thorn, while Julia Stiles is riveting and spot-on as Katherine, a mother so terrified of her child that it leads to dreams filled with terrible apparitions. Mia Farrow is the ultimate witch-hag evil nanny – all wide-eyed with intense devotion to her evil charge and a stone cold face surrounded by thick mane of hair. As for Seamus Davey-Fitzpatrick as Damien, it’s scary that a child actor can play the bad seed so well. Seamus’s Damien is a soul spoiled - just pure rotten, like bad meat surrounded by an evil presence. Pete Postlethwaite and David Thewlis also strike the perfect notes in their respective supporting character parts.

I would compare The Omen to the 2005 film, The Skeleton Key. Both are entertaining supernatural thrillers aimed at an older crowd, each one at times a little illogical and having holes in both concept and execution. Good, but not great, The Omen delivers not less, but a little more than it promises.