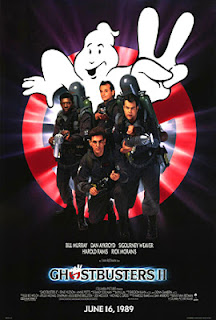 COMEDY with elements of sci-fi and horror

The subject of this movie review is Ghostbusters II, a 1989 supernatural comedy film produced and directed by Ivan Reitman. It is a squeal to the 1984 film, Ghostbusters.

Five years after the events of the original film, Ghostbusters II finds the Ghostbusters out of business and reviled by the New York City municipal government even after the Busters saved the city from Sumerian Armageddon in the first film. However, a resurgence in spectral (ghostly) activity allows the four Ghostbusters: Dr. Peter Vinkman (Bill Murray), Dr. Raymond Stantz (Dan Aykroyd), Dr. Egon Spengler (Harold Ramis), and Winston Zeddemore (Ernie Hudson) to revive the business.

Vinkman also attempts to rekindle his romance with Dana Barrett (Sigourney Weaver), which fizzled between films. Barrett has a son, Oscar (infant twins Will & Hank Deutschendorf), and though she’s wary of Vinkman’s peculiar ways, she comes to rely on him when evil spirits start trying to abduct Oscar. When the team discovers a massive river of ectoplasm beneath NYC, they know something big and evil is on the way.

Ghostbusters II is really a domestic comedy about reuniting with old friends and strengthen bonds, whereas the first film was a big, funny summer genre picture. Ghost Busters featured well-known and popular comedic actors and what was at the time spectacular special effects; the talent and an off-kilter sci-fi/comedy/horror-lite tale mixed into a popular family friendly comedy with mass appeal.

The sequel is funny, but it appeared five years after the first film, and it seemed, at the time, as if the film’s window of opportunity had closed long before it was released. Years later, it still seems like something tacked on to the original film. Still, there is something appealing about it; maybe it is the sense of camaraderie and easy humor. It’s like a Ghost Busters for old people – a funny, light-hearted film that lacks the zing of high octane SFX films aimed at the young ‘uns. Besides, Bill Murray, who seems to be phoning it in, is still as sharp as ever. It’s amazing that he can be so laid back, so cool, so disinterested and make his sardonic and sarcastic humor twice as sharp as someone else trying three times as hard.