"The Innocents" is the Ultimate Ghost Story 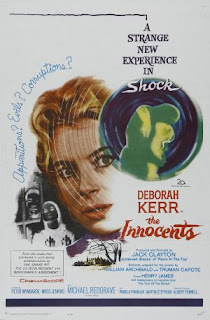 Miss Giddens (Deborah Kerr), a young governess, accepts a position supervising a young girl, Flora (Pamela Franklin) and her brother, Miles (Martin Stephens), (who is away at school when Miss Giddens first arrives), in a lonely old house on a large English country estate. Things are going well until Miles is expelled from school and returns home. Not only must Miss Giddens deal with Miles disruptive behavior, but she also begins to see shadowy figures and ghostly apparitions and to hear mysterious voices, strange noises, and unexplained music in the manor house and on its grounds. Miss Giddens comes to believe that the house, as well as the children, are haunted by former servants, but the estate’s clouded history is keeping her in the dark… and in danger.

The Innocents, a film adaptation of Henry James’ famed novella, The Turn of the Screw, is one of best English-language horror films ever made. It’s hard to imagine that this film isn’t among the top three to five best Western ghost stories on film. Like James’ novel, producer/director Jack Clayton’s film is coy about whether there are actually ghosts haunting the house or whether Miss Giddens the governess is mentally disturbed, though Clayton and his writers lean towards the former. Viewers may recognize one of Nicole Kidman’s films, 2001’s The Others, as a clever reworking of Henry James’ story via this film. The 2005 film The Skeleton Key also seems to have been launched from this concept.

However, regardless of how one interprets the film, it is a masterwork. Deborah Kerr is superb as the busybody Miss Giddens who is at once high-strung and then quite reserved. Pamela Franklin and Martin Stephens are mesmerizing as the sly, manipulative, and clever children. Rarely have young actors managed to look purely innocent and naïve while at the same time coming across and guilty and disingenuous. Megs Jenkins does a fine turn as the subtle messy housekeeper, Mrs. Grose, with her crafty touch of instantly feigning innocence. We can’t quite get a bead on the children, and Miss Giddens obviously has her problems, while Mrs. Grose knows more than she’ll ever let on – no matter how innocent she may act. And those ghosts: they are determined phantoms that the children must see because they seem like such obvious solid looking phantoms, but the director presents them in such a way that maybe only Miss Giddens is crazy enough to see them. And the great performances totally sell us into the confusion and doubt.

Not only do we get excellent acting, but also Clayton, cinematographer Freddie Francis, and composer Georges Auric deliver career-defining work. Auric’s music for The Innocents defines the term, “haunting score,” yet you wouldn’t really notice it unless you stopped specifically to hear it. Auric made the score quiet, yet forcefully effective. Oscar-winning cinematographer Freddie Francis (Sons and Lovers, Glory) gave the film a look that is as beautiful and it is frightening. Rarely does a ghost story seem so fascinating; his lighting crew certainly did stellar work. I wanted to live in Francis’ beautiful shot dream world no matter how many ghosts were there. Finally, producer/director Jack Clayton brought his talented cast and crew together and created a captivating film that is as distant as it is alluring – always calling the viewer, yet being standoffish.

The Innocents is a ghost story that seems itself to be a ghost – a haunting black and white dream that refuses to give up it secrets no matter how coy it is when giving up tidbits. Its shocking, disquieting ending is like an unsettled ghost that won’t let us leave but also pushes us away. This spectral ghost story is unforgettable.

Posted by Leroy Douresseaux at 1:15 PM