"The Mummy" Always Worth Unwrapping 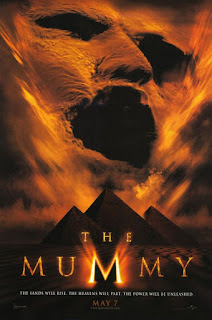 The subject of this movie review is The Mummy, a 1999 fantasy/adventure film from director Stephen Sommers. The film is a loose remake of the 1932 film, The Mummy, starring the great Boris Karloff, and is also the first of a three-film set.

In 1923, Richard “Rick” O’Connell (Brendan Fraser) a French Foreign Legion soldier, leads a librarian, Evelyn “Evie” Carnahan (Rachel Weisz), and her wayward brother, Jonathan (John Hannah,) to the legendary ancient Egyptian City of the Dead, Hamunaptra, on a treasure hunt/archeological dig. Pursued by a group of American adventurers and assorted ruffians, our heroes become part of bungling gang that resurrects Imhotep (Arnold Vosloo), a cursed Egyptian priest out to wreak havoc on the world. When Imhotep sees Evie for the first time, he decides to use her as the human sacrifice to free his love mummified lover, Anck–Su–Namum (Patricia Velazquez), from the Underworld.

Part of Universal Pictures plan to remake its classic “Universal Monster” movies as high tech updates, The Mummy, the new version of the 1932 classic, shocked Universal with its 40 million dollar opening weekend (tests and previews screenings had suggest about 25 million). With its combinations of eye-popping effects, occasional chills, and good action sequences, The Mummy (which received an Oscar nomination for “Best Sound”) is an excellent example of a movie as great entertainment – cinematic fast food that delivers on audience expectations.

Director Stephen Sommers had directed two Disney films, Tom and Huck and the live action version of The Jungle Book and the funky 1998 sci-fi/horror B-movie, Deep Rising. They may have been indications of his skill to weave effective entertainment, but the Mummy is the big payoff.

The hyped up action scenes deliver every time; not one of them is awkward or off of pace. From the opening battle scene at the ruins of Hamunaptra to the fight aboard the boat, from the giant wall of sand with the imprint of Imhotep’s face to the final fight scene, it’s the perfect movie with which to sit back and enjoy.

There is a fine cast of supporting characters. Oded Fehr as Ardeth Bay, leader of the Medjai, a group that watches over Imhotep’s tomb, is handsome, dashing, and mysterious. Kevin J O’Connor’s Beni Gabor is the perfect comic relief (a nice bookend to John Hannah’s Jonathan), but he also makes a nasty villain. It’s quite entertaining to watch the three Americans: Mr. Henderson (Stephen Dunham), Mr. Daniels (Corey Johnson), and Mr. Burns (Tuc Watkins) in their cat and mouse game with Imhotep as the Mummy absorbs their “organs and fluids” to regenerate his own body.

The Mummy is also a fun and spooky horror show with enough scary scenes to match the action. What reminds of Raiders of the Lost Ark is the quite moments of character and intimacy between Rick and Evie. Sommers can’t make Fraser and Ms. Weisz as convincing as Steven Spielberg made Harrison Ford and Karen Allen, but it’s good enough. No one here seems to pretend to greatness, but they seemed determined to please the studio and their potential audience with a hit film and they did.

Here, the issues are commerce and craft rather than art, and the craftsmanship is so good that we may very well return to this gem time and again. As goofy and throw away as it might all seem to be, The Mummy is fun stuff, pure cinematic magic.

Posted by Leroy Douresseaux at 10:15 AM