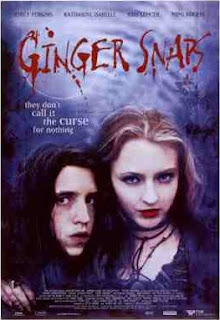 HORROR with elements of comedy

The subject of this movie review is Ginger Snaps, a 2000 Canadian horror film and werewolf movie. The title is a pun on the term, “ginger snaps,” which in the U.S. is a name for a kind of cookie. In this film, there is a girl named Ginger who “snaps,” as in goes really crazy.

In the horror and dark comic film, Ginger Snaps, Brigitte “B” Fitzgerald (Emily Perkins) and her sister, Ginger (Katharine Isabelle), are local outcasts because of their fascination with death and the macabre. Sullen and frequently dressed light goth, the girls earn the derision of their classmates. However, one night while wandering near the woods on their way to get a minor revenge against tormenting female classmate, a large wild animal attacks and bites Ginger.

Sam (Kris Lemche), a local drug dealer with an eye on “B,” runs over the beast while it’s chasing the girls and realizes that the thing is a werewolf. Before long, Ginger is exhibiting hostile behavior and becomes sexually aggressive. Her body begins to change, and once she realizes and accepts that she is becoming a werewolf, Ginger wants “B” to share it with her just as they promised to share death in a suicide pact. Brigitte is having second thoughts, and she gets Sam to help her find a cure for Ginger. Ginger, however, isn’t taking “no” for an answer.

Ginger Snaps is a novel take on the werewolf mythos, mixing in elements of teen angst, feminism, grrrl power, and lots of teenage female body issues, especially menstruation. The film comes across as a bit gross at times, but film’s ideas are engaging. It’s unique and interesting how the “curse” of the werewolf is tied to the “curse” of that time of the month and to Ginger and B’s close and intense relationship. Most of the credit should go to screenwriter Karen Walton for her sharp and witty dialogue. Though the script tends to drag, the chatting between the characters has an intimate feeling (even when characters are fighting amongst themselves) that gives the illusion that these people really know each other. The performances are occasionally tepid, but sometimes nuanced and passionate. Mimi Rogers is creepy as the girls’ mother, Pamela.

Ginger Snaps seems about five or ten minutes too long, and it really tends to drag. However, the film has good atmosphere and is a nice twist on the werewolf movie. I especially like the fact that the creature effects are makeup and (apparently) animatronics rather than CGI.

Posted by Leroy Douresseaux at 11:25 AM