Morgan Freeman Quite Good (of course) in "Along Came a Spider" 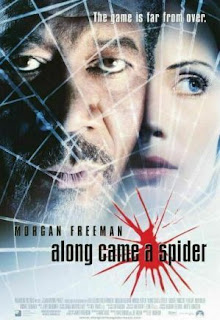 The subject of this movie review is Along Came a Spider, a 2001 crime thriller and police procedural directed by Lee Tamahori and starring Morgan Freeman as Alex Cross. The film is adapted from James Patterson’s 1993 novel, Along Came a Spider, which was the first Alex Cross novel. However, the second Cross novel, Kiss the Girls (1995), was the first to be filmed, in 1997 and also starring Freeman.

When a teacher at a private school kidnaps a Congressman’s daughter right under the Secret Service’s nose, Detective Alex Cross (Morgan Freeman) must find the child. The clever kidnapper, named Gary Soneji (Michael Wincott), sucks Alex into the case to make a name for himself. Alex must be sharp as ever in the game against an insane opponent though he still grieves for his partner who was recently killed during a stake out.

Along Came a Spider is a follow-up of sorts to Kiss the Girls, a previous film adaptation of a James Patterson novel, which also featured the Alex Cross, an African-American, Washington D.C. detective and profiler. While the latter film was slow and clunky, Along Came a Spider is brisk and breezy, and maybe a little too much of that at times, but a better effort than its predecessor. It certainly doesn’t seem like one of those numerous Silence of the Lambs copycats.

Director Tamahori (Once Were Warriors) chases Cross around the Washington locales, but the locales are window dressings behind the mind and presence of Cross. Freeman is of course, brilliant and convincing as Cross. Freeman plays him as sensitive, brave, earthy, and a rough neck when he has to be. Freeman, alone as the best American actor before Kevin Spacey exploded, is worth the price of admission, and Tamahori knows this. Tamahori is good, and he realizes how to capture on film the tension and detail of Patterson’s giant novels. Adapting a Patterson police procedural is difficult, but Tamahori and writer Marc Moss distill the novel’s spirit into Cross. The audience then has to read the story through Cross via his actions and personality. A lesser actor would be lost in converting the text of the novel into film; Freeman is up to the task and is the storyteller as much as, or perhaps more so than, Tamahori and Moss.

Although mostly driven by Cross’s character, Spider allows Soneji some good moments of his own. Cross’s tag along partner, Jezzie Flannigan (Monica Potter) slyly dominates quite a bit of the film with her ambiguous and plastic facial expressions. The victim, Megan Rose (Mike Boreem), has an endearing personality. As Rose, Ms. Boreem is the rare child thespian, an actor and not a pretender. She convinces that she is as smart, as brave, and as spunky as the character is supposed to be.

While on the surface Along Came a Spider is a by the numbers hunt and chase story in which the quarry is one of those mad genius criminals, it is a tour de force of Freeman’s screen presence. Not high art in and of itself, it is good Hollywood product. The art is in Freeman’s talent, and worth repeated viewings just for the man.