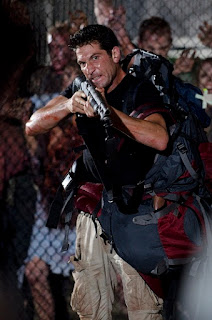 Fans of “The Walking Dead” have another great reason to rejoice, as Jon Bernthal, who portrayed “Shane Walsh” in the hit AMC series, has been added to the roster at Wizard World Austin Comic Con at the Austin Convention Center. He joins fellow cast members Norman Reedus (“Daryl Dixon”) and Michael Rooker (“Merle Dixon”); all three are scheduled to appear on Saturday, Oct. 27, and Sunday, Oct. 28.

The classically-trained Bernthal recently completed filming Ric Roman Waugh’s action drama, Snitch, opposite Susan Sarandon and Dwayne Johnson. He has appeared in such large-scale productions as World Trade Center, The Pacific and Rampart, and has had guest roles on top TV series like "CSI: Miami," "Boston Legal," "Without a Trace" and "How I Met Your Mother."

Bernthal, Reedus and Rooker will greet Wizard World Austin Comic Con fans, sign autographs, pose for photo ops (including a chance to be photographed with all three) and participate together in an interactive Q&A panel.

“The Walking Dead” earned a Golden Globe nomination for Best Drama Series, a Writers Guild of America nomination for Best New Series, and recognition as one of AFI’s Ten Best Television Programs of the Year. The series set new records as the most watched drama series in basic cable history, and is aired internationally in over 120 countries and 33 languages.

In addition to Bernthal, Reedus and Rooker, eight stars of the popular series “Star Trek: The Next Generation” will gather for their first 25-year U.S. reunion at Wizard World Austin Comic Con, including the legendary Patrick Stewart, who portrayed the stern, determined "Captain Jean-Luc Picard," commander of the USS Enterprise.