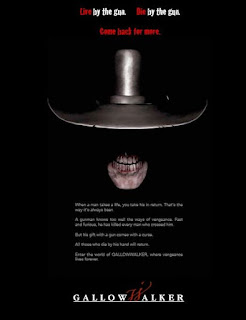 Wesley Snipes Returns to the Silver Screen, Gun-slinging his way through the Wild, Wild West

Movie star Wesley Snipes will be released into the wild, wild west to fight the undead and blast his way into Film4’s FrightFest 2012 Saturday, October 27th with the World Premiere of his latest film.

LOS ANGELES--(BUSINESS WIRE)--Movie star Wesley Snipes is making headlines with his long-awaited and highly-anticipated return to the big screen with the World Premiere of the cowboy wild west- zombie mash-up: Gallowwalkers. Snipes stars as the mysterious gunslinger Aman, who carries a curse. The curse: all those who die by his hand shall return to hunt him. Snipes is forced to blast his way through the old west, while the scores of undead ferociously track him to the bitter end. The film’s slogan is “Live by the gun. Die by the gun. Come back for more.”

The fans of the star and fans of the wild west and horror genres have been long-awaiting the film’s release. Shrouds of mystery and rumor surrounded the film following Wesley’s legal complications and headlines of the last several years. However, with Wesley’s release imminent (scheduled for the summer of 2013), the film remained “never having been seen” and its release strategy is still a tightly keep secret.

The films’ Producers said in a statement Friday: “We support Wesley fully in his film career and look forward to his return next summer. We are beyond thrilled to announce Wesley’s return in the World Premiere of Gallowwalkers. We couldn’t be more excited for the road ahead.” Gallowwalkers is set to World Premiere at the Vue West End in London’s Leicester Square, Saturdaym October 27th 2012 at 9pm.

Shot in the dusty sands of the Namibian desert, Gallowwalkers was produced and executive produced by Jack Bowyer (under his production shingle Jack Bowyer Productions), Executive Produced by Roger Grad, Ken Ross and Directed by Andrew Goth.

ABOUT JACK BOWYER PRODUCTIONS
Jack Bowyer Productions is a UK-based production company. Principal Jack Bowyer founded the company in 2007. JB is a prolific producer of independent film; they recently received a Nomination for “Best International Film” at Raindance for their latest film DARK HEARTS starring X-men topper Lucas Till.

ABOUT BOUNDLESS PICTURES
Founded in 2008 by Courtney Lauren Penn and Brandon Burrows, Boundless Pictures is a New York City, Los Angeles and Greenwich, Connecticut-based production company that develops, co-finances and produces independent film. They have produced alongside Jack Bowyer on Gallowwalkers and Dark Hearts.

Posted by Leroy Douresseaux at 11:08 AM