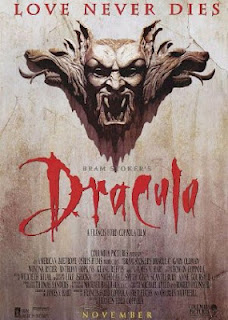 HORROR/FANTASY/ROMANCE with elements of drama

Francis Ford Coppola’s lavish and colorful gothic extravaganza, Bram Stoker’s Dracula, is a three-time Academy Award winner. Dazzling, lush, and sensuous, the film affirms Coppola’s place as imaginative and brilliant filmmaker. The film also testifies to the talents of all the cohorts. Eschewing the (then) burgeoning use of computers to add special effects to films, the SFX, cinematographer, makeup, sets artists, and designers used old-fashioned craftsmanship and artistry to create an amazing movie that harks to the past while looking out of this world impossible.

The film’s story is similar to previous adaptations of Bram Stoker’s novel (although most films are actually based on an early 20th century stage version of Stoker’s novel than the novel itself), but the attraction here is the visual interpretation. Jonathan Harker (Keanu Reeves), a young lawyer, travels to into the gloomy misty land of Eastern Europe, Transylvania, to meet a mysterious client, Count Dracula (Gary Oldman), who is buying several tracts of property in London. Dracula, a vampire, later imprisons Harker when he discovers that Mina Murray (Winona Ryder), Harker’s fiancée, exactly resembles is late human wife, Elisabeta (Ms. Ryder), who killed herself centuries ago. Dracula travels in secret to London where he seduces and drains the life out of Mina’s friend, Lucy Westenra (Sadie Frost). However, the cautious Dr. Jack Seward (Richard E. Grant) summons his old mentor, Professor Abraham Van Helsing (Anthony Hopkins) who immediately recognizes Lucy’s ailment and subsequent death as the work of a vampire. Van Helsing gathers Lucy’s friends to destroy Dracula, but the undead count has in eyes on Mina, and she, surprisingly, as her eyes on him.

The film is very entertaining, a stunning visual treat, and a unique horror film that hypnotizes you into watching it over and over again. Gary Oldman is one of the best screen Dracula’s ever; he is magnificent and alluring, but also fearsome and awe-inspiring. Winona Ryder is simultaneously demure and spirited as the brave Mina who is also secretly a naughty girl. The rest of the cast is mostly hit or miss. Anthony Hopkins gives a mostly annoying performance as Van Helsing, in which he only occasionally makes the character the brave and resolute leader he was in the original novel. Keanu Reeves is wooden, stiff, and nearly undead himself as Jonathan Harker. How could Mina not choose an undead monster with romantic inclinations over a pebble like Reeves’ Harker. The rest of the cast is functional and has its moments. The attraction here is the amazing work of Coppola and his filmmaking crew, as well as the screen duo of Oldman and Ms. Ryder; they’re the reasons you see this film.